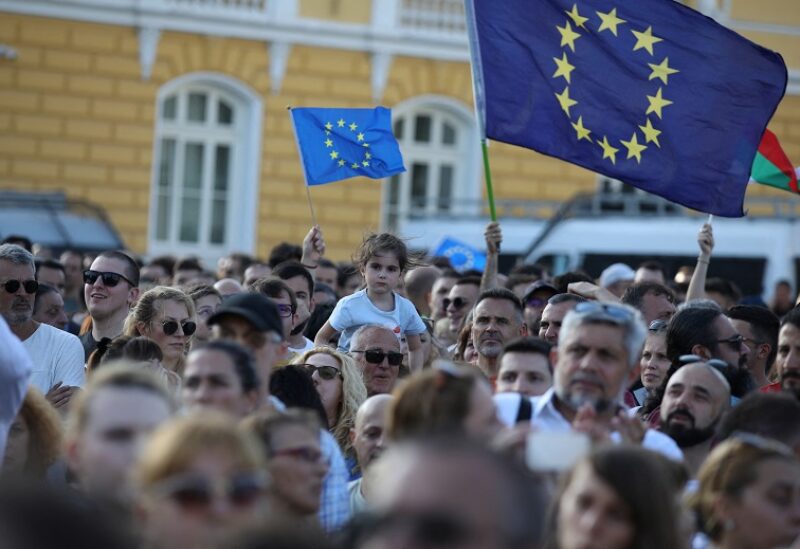 People attend a demonstration supporting the government in front of the parliament in Sofia, Bulgaria, June 22, 2022. REUTERS/Spasiyana Sergieva

With 123 votes in favor and 116 against, Members of the Bulgarian parliament on Wednesday voted for a no-confidence motion against Prime Minister Kiril Petkov.
The move potentially sets the stage for a fresh round of elections. However, Petkov’s centrist PP party does have a second chance to propose a government to lawmakers.
The vote comes after the ruling coalition lost its majority amid disputes over budget spending and Sofia’s blocking of North Macedonia’s EU accession.

Petkov had promised to end Bulgaria’s problem of endemic corruption after a decade of rule by the conservative Boyko Borisov.

However, the coalition started to look shaky soon after Russia’s invasion of Ukraine, which accentuated divisions with the government. While Petkov has taken a strong pro-European and pro-NATO position since the war began, Bulgaria has strong historical ties with Moscow.

Earlier this month, the anti-establishment ITN party led by entertainer Slavi Trifonov withdrew its support from the coalition.

Borisov’s conservative GERB party quickly filed a no-confidence motion that cited “the failure of the government’s economic and financial policy” amid soaring inflation.