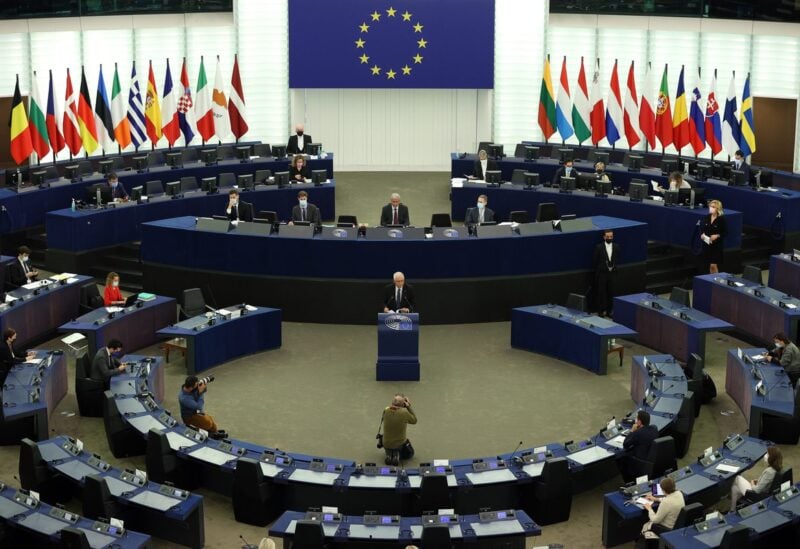 After speaking during a debate on the rule of law in Poland and Hungary, A Bulgarian nationalist MEP gave a Nazi salute in the chamber of the European Parliament in Strasbourg on Wednesday.

Angel Dzhambazki of the Bulgarian nationalist VMRO party is seen extending his right arm in front of him before exiting the chamber in a video of the debate. VMRO is in the euroskeptic European Conservatives and Reformists (ECR) group in the European Parliament.
“We will never allow you to tell us what to say and do. Long live Orban and Fidesz, long live Kaczynski and PiS, long live Bulgaria and our nation-state,” Dzhambazki said during the debate.

“Long live the Europe of nations,” he concluded.

On Twitter, he also described as an “abomination” the European Court of Justice’s decision to validate a mechanism that allows the blocking of funds to countries where there are violations of the rule of law. Hungary and Poland had contested the law, which was dismissed by the EU’s top court.
The state of the rule of law in Hungary and Poland has long been a contentious issue within the European Union. Brussels has criticized judicial reforms in Poland that it claims undermine the independence of judges. The EU has also taken a dim view of Warsaw’s refusal to accept the primacy of EU law over Polish law.

In the case of Hungary, the European Commission has voiced concerns over the issuing of public contracts, conflicts of interest and misspent EU funds.

The vice-president of the European Parliament, Italy’s Pina Picierno, said the institution would “check with the cameras what happened in this hemicycle, to see if there was a fascist salute or not.”

“We do not in any way allow fascist gestures and symbols. If this has been done, it is extremely serious and sanctions will be taken,” she warned.
In a tweet published after the debate, Picierno decried the salute, saying “in the session I presided over this evening, Bulgarian MEP Dzhambazki gave the Roman salute. I immediately condemned the incident and asked for this shameful and unacceptable gesture to be sanctioned.”

“The European Parliament is a living monument of democracy against barbarism and fascism,” she added
Manfred Weber, German MEP of the European People’s Party (EPP) and Christian Social Union in Bavaria (CSU), condemned the salute “in the harshest possible terms” in a tweet.

“It is the opposite of what the European Parliament stands for and we call for immediate sanctioning,” he added.