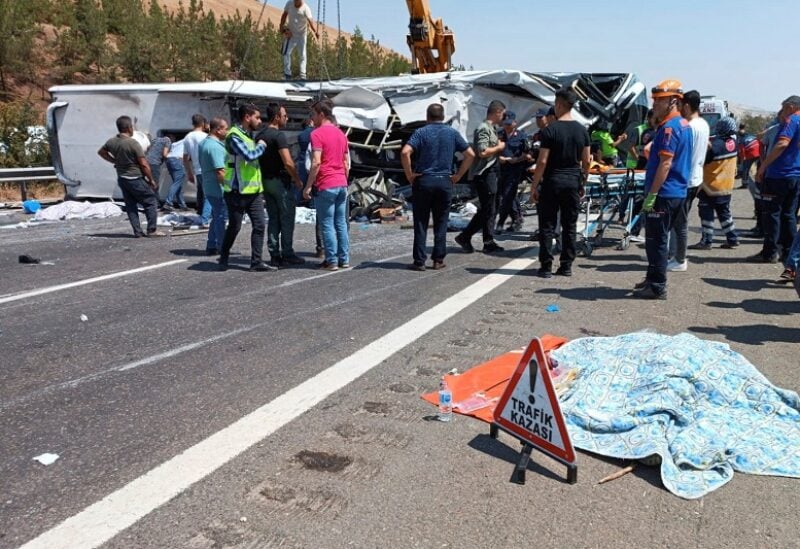 Rescue and emergency responders work at the scene after a bus crash on the highway between Gaziantep and Nizip, Turkey August 20, 2022. Ihlas News Agency via REUTERS ATTENTION EDITORS - THIS IMAGE WAS PROVIDED BY A THIRD PARTY. TURKEY OUT. NO COMMERCIAL OR EDITORIAL SALES IN TURKEY. NO RESALES. NO ARCHIVES

Al Ekhbariya TV reported early on Sunday, that a bus carrying 23 Saudi tourists has been involved in a traffic incident in Turkey,where four of the bus passengers were children.
Four people were taken to hospital and treated for moderate and minor injuries.

The Saudi Embassy in Ankara is following up on the health status of Saudi tourists, Al-Ekhbariya added.

The report said that the bus accident occurred in the northeastern Turkish city of Rize, on the eastern coast of the Black Sea.

On Saturday, at least 34 people were reported killed and dozens injured in two separate road accidents in Turkey, both in the country’s south

A first crash involving a bus and an ambulance killed 15 people and injured 31 more on a motorway in Gaziantep province, said local officials.

Governor Davut Gul said earlier the accident had involved “a bus, an emergency team and an ambulance” on the route between provincial capital Gaziantep and Nizip.

The DHA news agency said a passenger bus had crashed into an ambulance, a firefighting truck and a vehicle carrying journalists at the site of a previous crash.

In the second accident which happened at Derik in Mardin province, 250 kilometers away away from the first one, reports said the emergency services were also attending to an earlier incident at the site when a truck plowed into a crowd of onlookers.

Some 26 people were injured, six of them seriously, by the hurtling truck, Health Minister Fahrettin Koca wrote on Twitter.

The accident in Derik in Mardin province “occurred after the breaks gave out on a lorry, which hit a crowd,” Koca wrote.