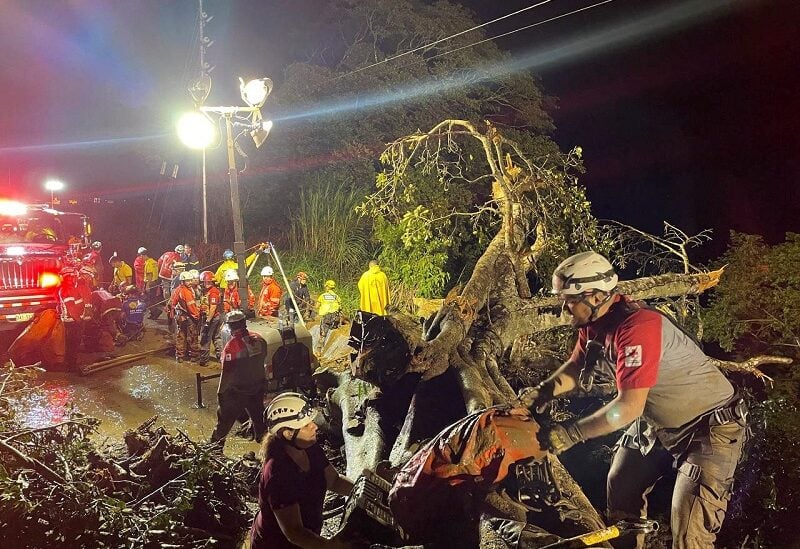 Members of the Red Cross and firefighters work at the scene of a deadly bus accident, where a landslide reportedly hit the vehicle, throwing it off a cliff, in Cambronero, Alajuela Province, Costa Rica in this social media handout image released September 18, 2022. Cruz Roja/Handout via REUTERS NO RESALES. NO ARCHIVES THIS IMAGE HAS BEEN SUPPLIED BY A THIRD PARTY.

At least 9 people are dead while several others have been injured following an accident where a bus and two other vehicles amid heavy rains and landslides plunged into a ravine in Costa Rica. Meanwhile, approximately 55 people were rescued and taken to the hospital, Authorities announced.

The landslide was near a mountain pass called El Hundimiento in Costa Rica’s Alajuela Province which is around 80 kilometres away from the capital San Jose. Rescue efforts were underway since Saturday night after the double-decker bus fell into a 75-meter ravine. In a statement on Twitter after the accident the Red Cross said, “As of now, we know of nine people who did not have vital signs.”

According to the Costa Rican Social Security which is in charge of the country’s public health services, more than 50 people including the bus driver have been pulled out. While the Red Cross has estimated the number of passengers to be at least 60.

According to the local police, firefighters and emergency teams worked through Sunday to recover the bodies. The bus was on a route between San Jose and the northwestern province of Santa Cruz de Guanacaste. Reportedly, locals in the area have blamed the accident on the lack of signage and protective barriers along the road.

Meanwhile, the National Meteorological Institute on Sunday said that the intense rains may continue in the coastal areas. Amid the intense rains following a severe damage, hundreds of families had to be evacuated.

Costa Rica President Rodrigo Chaves announced three-day mourning on Sunday and said, “This situation in which many families lose their belongings is really sad and worrying.” The president has also reportedly cancelled his visit to New York for the United Nations General Assembly because of the emergency caused by heavy rains in the country.