Busking Brit crosses Iraq on his way to COP27 without flying 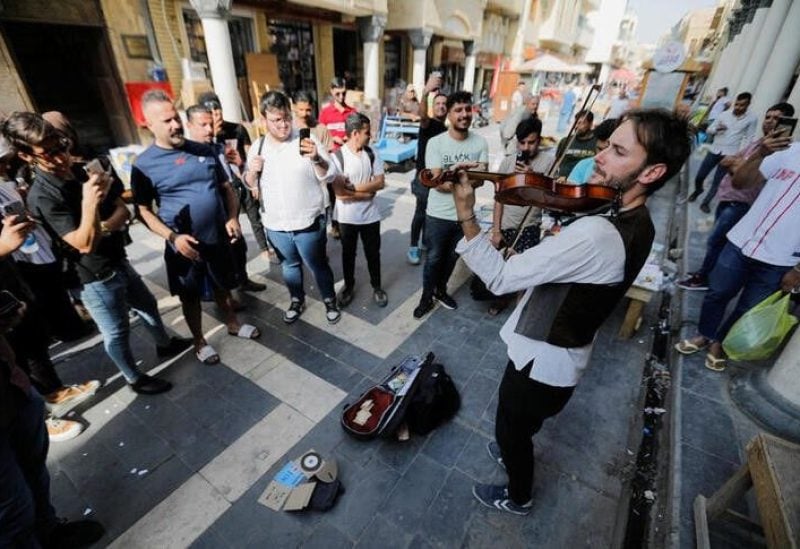 Briton Dan Hodd, 29 years old, who left Spain about a month ago to go to the COP27 in Sharm el Sheikh without flying, but mostly biking and using public transportation, plays the violin in Baghdad, Iraq October 26, 2022. REUTERS

Dan Hodd, who left Spain a month ago and is cycling through bustling Baghdad on his way to the COP27 climate conference in Egypt without taking a plane, was carrying a violin on his back and maps in his bag.

The 29-year-old British man stated, “I am attempting to demonstrate the significance within the transportation sector to do more about the climate catastrophe.

“We need to think about the way we are hopping back and forth around the globe on cheap vacations or for business travels.”

“In 2019, airlines were responsible for 2.4% of global CO2 emissions,” said Dan Rutherford, who directs the International Council on Clean Transportation’s aviation programmes, adding that because of the additional climate impact of aviation, its total warming impact rises to 3.5%.

After a drop during the coronavirus pandemic, air traffic is expected to bounce back to 2019 levels by 2024-25, he said.

Avoiding flying is not only part of Hodd’s message to delegates at COP27. His trip to Egypt is part of a long-term project to visit 100 countries in 10 years without flying, busking with his violin to earn enough to go on.

“A lot of why I have been travelling this way is a bit a guilt that I feel for the fact that I knew this insatiable wanderlust would have me travelling around the world for a long time,” Hodd said.

Now in his sixth year of travel, the seasoned traveller and graduate in music psychology told Reuters that pollution on the road was one of the main challenges for cyclists.

“The smell of petrol, it just dominates everything” he said, adding that he often had to ride with his mouth covered despite high temperatures.

“We live on a planet that is not built for sustainable travelling”, he said.