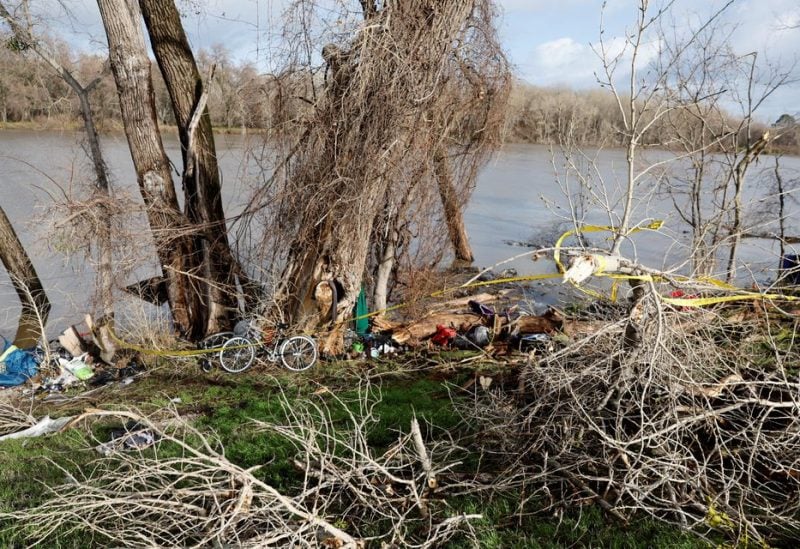 A view of a scene where a homeless woman was killed by a falling tree branch during a winter storm, at the bank of the Sacramento River in Sacramento, California, U.S. January 8, 2023 - REUTERS

After ten days of constant bad weather that claimed the lives of 12 people and left thousands without power, tens of millions of Californians were once again forced to deal with torrential rains, strong winds, and flooding on Monday.

According to the National Weather Service, the majority of California’s 39 million population may anticipate significant rainfall of up to five inches (13 cm) near the coast, more than a foot of snow to the west, and wind gusts of up to 65 miles per hour across the state over the next several days.

Monday’s forecast is the latest round of ugly weather that has claimed the lives of at least 12 people in California, Governor Gavin Newsom told a news conference on Sunday. Among the victims was a toddler who was killed by a redwood tree that fell and crushed a mobile home in northern California.

The weather has also toppled trees and power lines, knocking out power for tens of thousands of Californians. As of Monday morning, some 120,000 homes and business were without electricity, according to data from Poweroutage.us.

Two overlapping phenomena – an immense airborne stream of dense moisture from the ocean called an atmospheric river and a sprawling, hurricane-force low-pressure system known as a bomb cyclone – have caused devastating flooding and record snowfall over the past week.

The severe weather produced ferocious wind gusts that overturned trucks, inundated small villages along the coast of northern California, and stirred up a storm surge that swept away a pier in Santa Cruz.

According to the National Weather Service, the substantial flooding and ground saturation brought on by the recent heavy rain and snow will be exacerbated by the next storm that moves through this week.