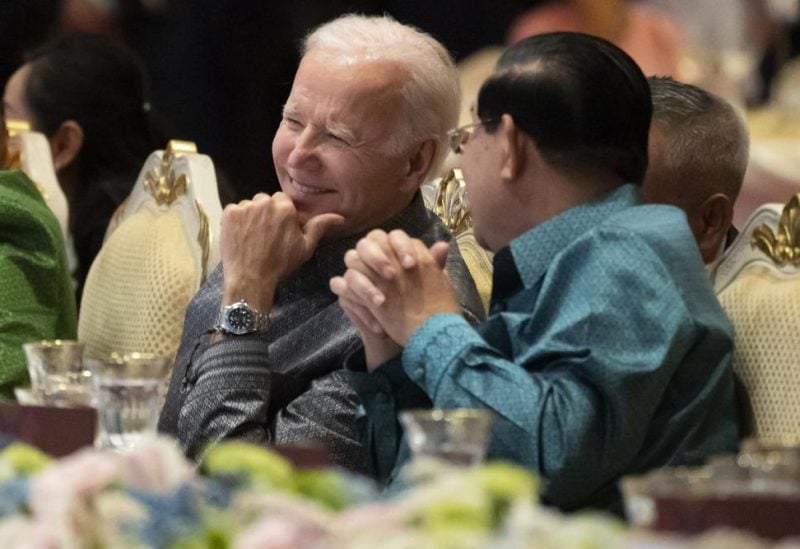 Cambodian Prime Minister Hun Sen announced Tuesday that he has COVID-19 and will leave the Group of 20 meetings in Bali, just days after hosting President Joe Biden and other world leaders in his country’s capital for a summit.

The diagnosis came as the heads of the G-20 leading economies and other nations convened on the Indonesian resort island for a two-day meeting.

In a posting on his Facebook page, the Cambodian leader said he tested positive for the coronavirus Monday night and an Indonesian physician confirmed the diagnosis on Tuesday morning. He canceled his meetings at the G-20 as well as the upcoming APEC economic forum in Bangkok to return home.

The White House said Biden tested negative Tuesday morning and is not considered a close contact as defined by the U.S. Centers for Disease Control and Prevention.

The two leaders spent considerable time together Saturday, and were at a joint meeting but not seated together as recently as Sunday.

Hun Sen said it was fortunate that he arrived in Bali late Monday and was unable to join a dinner with French President Emmanuel Macron and other leaders.

The Cambodian capital Phnom Penh was the host of the Association of Southeast Asian Nation summit that ended on Sunday. Hun Sen met and shook hands with many leaders who attended one-on-one, some on multiple occasions.

Cambodia last month lifted most of its COVID-19 restrictions on travelers, and world leaders arriving for the ASEAN summit were recommended to continue following health and safety protocols but were not required to do so.

During the summit, almost none of the leaders or other participants wore masks and all were seated close to one another, often for lengthy periods of time.

Biden sat next to Hun Sen during a lengthy gala dinner Saturday evening. They spent time close together earlier Saturday in bilateral discussions as well as talks during the wider ASEAN meeting. They were both participants in Sunday’s parallel East Asia Summit as well.

As the leader of the host nation, Hun Sen had contact with almost all of the top-level participants.

On Sunday, Hun Sen met with New Zealand’s Prime Minister Jacinda Ardern, Australia’s Prime Minister Anthony Albanese and others at a separate meeting on the sidelines of the summit. A spokesperson said Ardern tested negative for the virus Tuesday.

Hun Sen also was in contact with G-20 host Joko Widodo, the Indonesian president. The two men shook hands Sunday as Hun Sen handed over the ASEAN gavel, turning over the rotating chairmanship to Indonesia for 2023.

He said he feels normal and is continuing to carry out his duties as usual except for meeting with guests.

The G-20 summit’s Indonesian organizers required delegates and journalists covering the event to provide proof of vaccination against COVID-19 and undergo temperature checks on arrival. Participants were also expected to take daily coronavirus tests, though it was unclear if this requirement extended to heads of government.