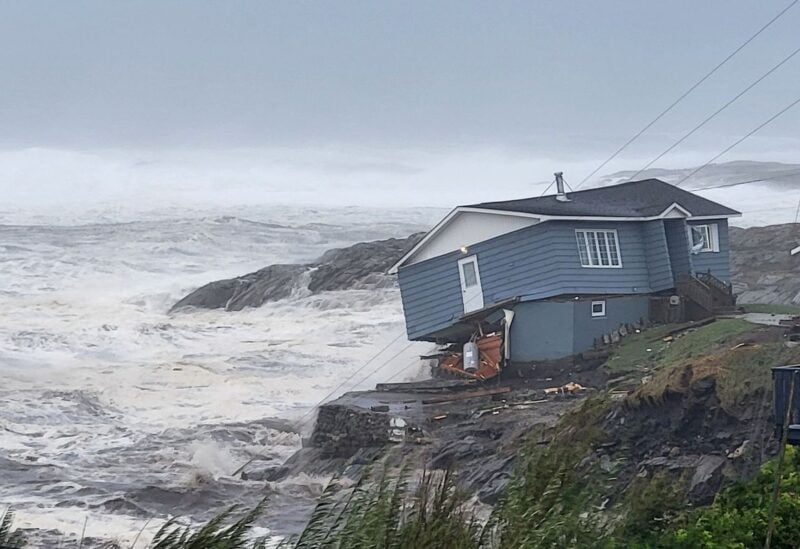 Waves roll in near a damaged house built close to the shore as Hurricane Fiona, later downgraded to a post-tropical cyclone, passes the Atlantic settlement of Port aux Basques, Newfoundland and Labrador, Canada September 24, 2022. Courtesy of Wreckhouse Press/Handout via REUTERS

After severe storm Fiona wreaked havoc on Canada’s east coast, the attention moved to enormous clean-up activities, damage assessment, and the restoration of electricity and telecom services, as officials warned of a lengthy road to recovery.

With hurricane-force winds, the historic storm smashed into eastern Canada, prompting evacuations, uprooting trees and powerlines, and leaving many homes to “simply a pile of debris.”

The Canadian Hurricane Centre estimated that Fiona was the lowest pressured land falling storm on record in Canada.

Prime Minister Justin Trudeau said Canadian armed forces will be deployed to help with the clean-up, adding that Fiona caused significant damage and recovery will require a big effort.

Despite the intensity of the storm, there were no serious injuries or deaths, which government officials said was a result of residents paying heed to the repeated warnings.

Still, thousands of residents across Nova Scotia, Prince Edward Island (PEI) and Newfoundland were without power and dealing with patchy telecom connections, and government officials pleaded with residents for patience.

They warned that in some cases it would take weeks before essential services are fully restored.

“We do know that the damage is very extensive, quite likely the worst we have ever seen,” Dennis King, PEI premier, told reporters on Saturday.

“Islanders … should know that our road to recovery will be weeks or longer. It will be an all-hands on deck approach,” he added.

Several university students lined up for food outside convenience stores powered by generators due to the power outage caused by Fiona. The Canadian Red Cross has launched a fund raising drive to support the affected people.

Government officials said the full-scale of the destruction will only be known in the coming days and weeks. But with the storm packing gusts of up to 170 km/hour sweeping away homes, bridges and roads, Fiona was reminiscent of the damage caused by other storms, including Hurricane Dorian in 2019, which is estimated to have had an insurance bill of C$105 million.

Premiers of the affected provinces told the federal government they need long-term support around public and critical infrastructure after the storm tore off roofs of schools and community centers, as well as quick relief to businesses and families to get on with normal life quickly.

The storm also severely damaged fishing harbors in Atlantic Canada, which could hurt the country’s C$3.2 billion lobster industry, unless it is fully restored before the season kicks off in few weeks.

“Those fishers have a very immediate need to be able to access their livelihood once the storm passes,” Dominic LeBlanc, Minister of Intergovernmental Affairs of Canada, said on Saturday.

“So this is exactly the kind of work that will accompany provincial authorities in the coming weeks and months,” he added.