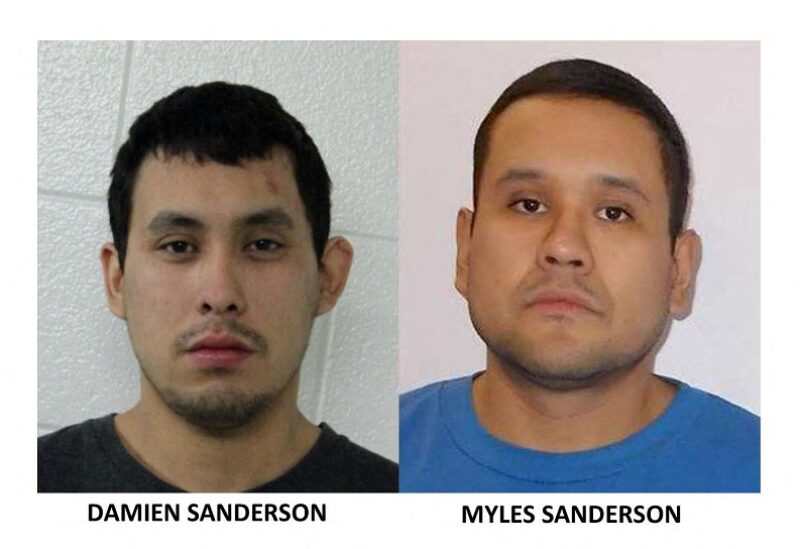 Damien Sanderson and Myles Sanderson, who are named by the Royal Canadian Mounted Police (RCMP) as suspects in stabbings in Canada's Saskatchewan province, are pictured in this undated handout image released by the RCMP September 4, 2022. RCMP/Handout via REUTERS THIS IMAGE HAS BEEN SUPPLIED BY A THIRD PARTY. NO RESALES. NO ARCHIVES

At least 10 people were killed and 15 wounded in a series of stabbings in two communities in Canada’s Saskatchewan province.

The Canadian Police is on a hunt for the two suspects believed to be involved in the knife attack.
According to police, the stabbings—in which some of the victims were targeted—took place in multiple locations on the James Smith Cree Nation and in the village of Weldon, northeast of Saskatoon on Sunday.

AP news agency has reported that the suspects have been identified as Damien Sanderson, 31. He is five feet seven inches tall and 155 pounds. And Myles Sanderson, 30, six-foot-one and 200 pounds.
Both have black hair and brown eyes and may be driving a black Nissan Rogue.
The incidents were reported first reported at 8.20 am (local time), following which the police issued a province-wide dangerous persons alert.

“It is horrific what has occurred in our province today,” Rhonda Blackmore, the Assistant Commissioner of the RCMP Saskatchewan was quoted as saying. She added that they are yet to determine the motive

Blackmore further said that they said they are trying to determine the relationship between the two suspects and whether they were known to police.

Based on the tip-off from the public, police said that the suspects were last seen in Saskatchewan’s capital of Regina, but they have gone incognito since then.

“If in the Regina area, take precautions & consider sheltering in place. Do not leave a secure location. DO NOT APPROACH suspicious persons. Do not pick up hitch hikers. Report suspicious persons, emergencies or info to 9-1-1. Do not disclose police locations,” the RCMP said in a message on Twitter.

In a news release, the Regina Police Service said it was working to locate and arrest the suspects and had “deployed additional resources for public safety throughout the city, including the football game at Mosaic Stadium.”