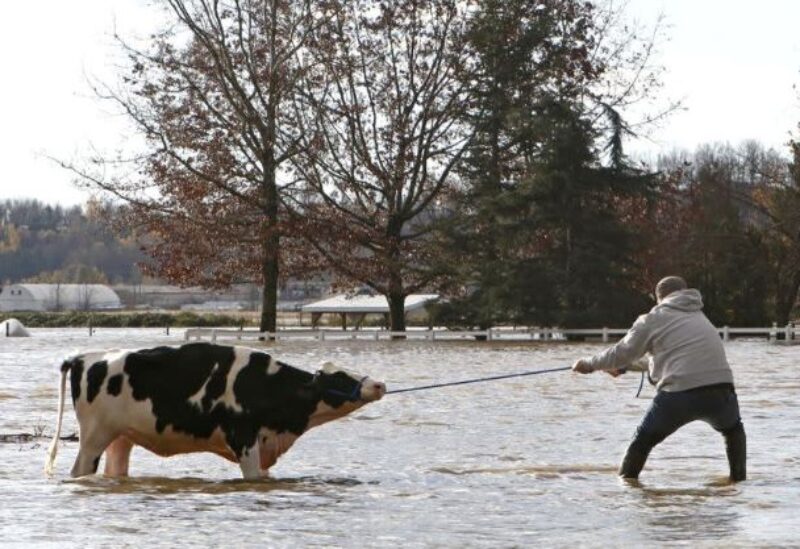 On Wednesday, Canada sent in the air force to assist British Columbia in dealing with catastrophic floods that have closed off access to the country’s major port and stranded thousands, with more rain predicted in the coming days.

Heavy rains caused mudslides that wrecked numerous major roads and killed at least one person, with officials warning that the death toll could grow.

Several villages had been completely shut off, and food was running low in Hope, 100 miles (160 kilometers) east of Vancouver.

According to Pastor Jeff Kuhn, a quarter of the town’s 6,000 citizens were looking for refuge.

“There is not much left in the grocery stores. They just can’t restock, there is no way to get through,” he told the Canadian Broadcasting Corp, saying that although some food had been airlifted in, there was just a day’s supply left.

Closer to Vancouver in the town of Abbotsford, farmers ignored an evacuation order and desperately tried to save their animals from rising waters, in some cases tying ropes around the necks of cows and pulling to higher ground.

“I know it’s hard for farmers to leave their livestock, but people’s lives are more important to me right now than livestock and chickens,” Mayor Henry Braun told reporters amid fears a water pumping station could fail and flood the area.

In addition to the toll on residents, the floods have destroyed the area’s transportation network, disrupting global supply chains already struggling to deal with problems caused by COVID-19.

Blair said the air force will help clear supply chain routes that have been badly hit.

Vancouver’s port moves C$550 million ($440 million) worth of cargo each day, ranging from automobiles to containers packed with essential commodities.

The floods temporarily shut down much of the movement of wheat and canola from Canada, one of the world’s biggest grain exporters. The disruption could also hit exports of potash.

Although the town of Merritt, 120 miles (200 km) northeast of Vancouver, has officially been evacuated, some people are stranded there. Pam Velt lost her house on Monday when the river started to rise rapidly.

“One minute we were sand bagging and I looked up and we were completely surrounded in water and debris and things from our property were floating by us. It was awful,” she told the CBC.