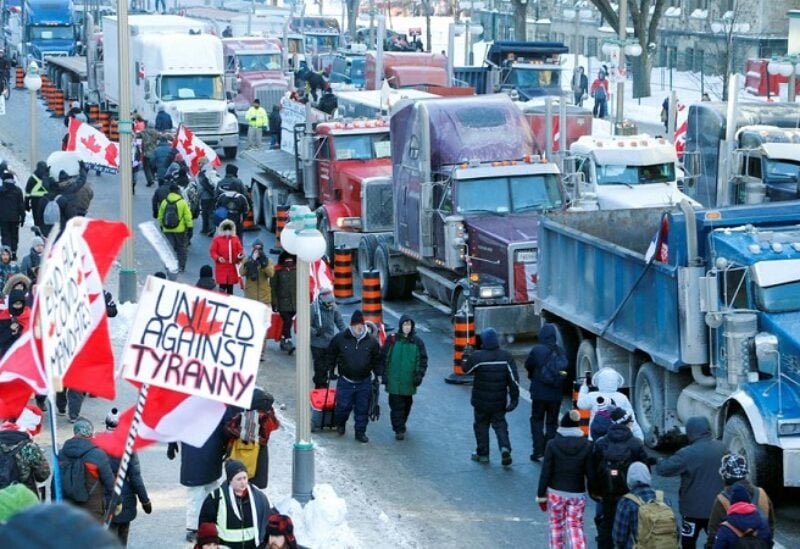 In a final attempt to clear the capital of trucks and demonstrators who have occupied the downtown core of Ottawa for more than three weeks to protest against pandemic restrictions, Canadian police on Saturday used pepper spray and stun grenades.

“We told you to leave. We gave you time to leave. We were slow and methodical, yet you were assaultive and aggressive with officers,” police said in a statement to the truckers posted on Twitter. Police used loudspeakers to warn the crowd to disperse or face arrest.

Protest organizers for the so-called Freedom Convoy said they had asked trucks to withdraw because of heavy-handed police tactics, and many trucks did exit the downtown core on Saturday. Thirty-eight vehicles have been towed, police said.
Officers smashed vehicle windows to arrest people locked inside, but the overall number of protesters has dwindled dramatically compared with previous days, with a couple hundred remaining near the advancing police cordon.

Some of those arrested on Saturday wore body armor and had smoke grenades and other fireworks in their bags and vehicles, police said.

Some loud bangs of stun grenades were heard. People were sprayed with “a chemical irritant in an effort to stop the assaultive behavior and for officer safety,” police said.

Protesters threw smoke canisters, police said. Several large trucks that have been parked in front of parliament for weeks drove away as the police approached their position. No tear gas has been used, police said.

Many of the main organizers have been taken into custody, and some have reportedly left. On Saturday, organizers said on Twitter they were “shocked at the abuses of power by the law enforcement in Ottawa” and so had “asked our truckers to move from Parliament Hill to avoid further brutality”.

The protest organizers said protesters had been “horse-trampled” on Friday, which police deny.