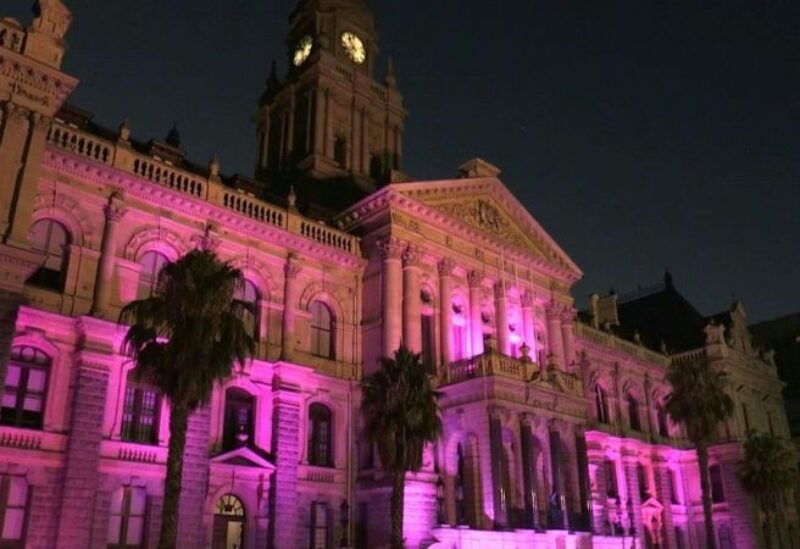 The Cape Town City Hall is bathed in purple light to honour the passing of Archbishop Desmond Tutu,

The bells of Cape Town’s St George’s Cathedral will ring for 10 minutes at noon every day until Friday in memory of South African anti-apartheid icon Archbishop Desmond Tutu, who died peacefully in a Cape Town nursing facility on Sunday. He was 90 years old.

Nobel laureate Tutu, who preached against the oppression of the white minority and was regarded as his country’s moral conscience by both black and white South Africans, had led countless rallies and marches against apartheid from St George’s steps.

Mourners lay flowers in Tutu’s honor outside the “People’s Cathedral,” a significant symbol of democracy, where a black and white portrait of Tutu was mounted to a fence.

The bells will signal the start of a week of mourning for Tutu, spurring a flood of tributes from around the world.

“Fighting for freedom from South Africa’s trenches needed a fortitude that cannot be defined,” Graca Machel, Nelson Mandela’s widow, said in a statement.

“Every step he made, day by day, minute by minute, he was changing the course of history. Every word he said touched the lives of millions, uniting and empowering those involved in the valiant fight against apartheid.”

Flags will be flying at half-mast domestically and at South African diplomatic offices overseas until the night before Tutu’s funeral service, according to South African President Cyril Ramaphosa.

“We shall mourn this worldwide beacon of peace and freedom in the days ahead,” he declared in a national speech late Sunday.

“We shall remember his accomplishments, his lessons, and our warm recollections of this guy who always balanced criticism with compassion.”

On Sunday, Cape Town’s city hall, Arch for Arch – a memorial to Tutu – and the landmark Table Mountain were lighted in purple, an homage to the robes Tutu frequently wore.

Tutu, a long-time friend of Nelson Mandela, was awarded the Nobel Peace Prize in 1984 for his nonviolent fight to white minority rule. A decade later, he watched the regime’s demise and headed a Truth and Reconciliation Commission to investigate the crimes perpetrated during its reign.

He eventually held the Black political class to account with as much feistiness as he did the Afrikaners, but his undying spirit of reconciliation always shined through, and he never stopped fighting. He was five feet five inches (1.68 metres) tall and had an infectious grin.