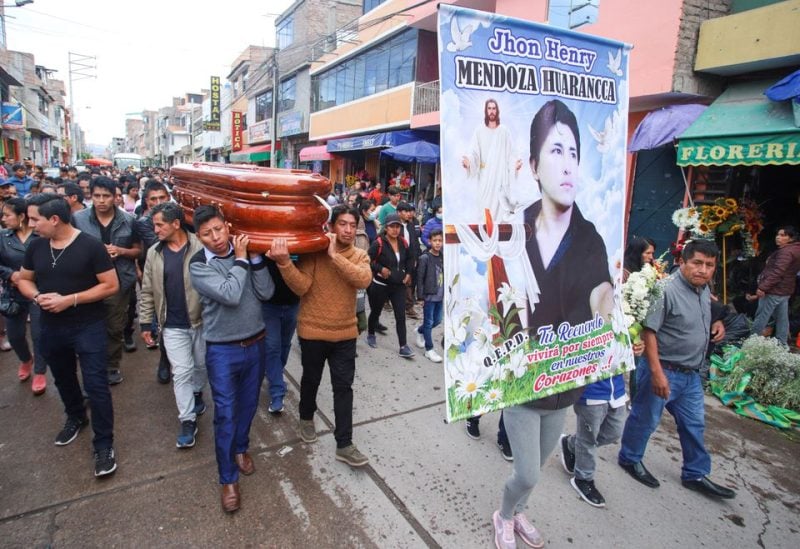 On December 15, Edgar Prado, 51, a mechanic and driver from the southern Peruvian city of Ayacucho, worked on his white Toyota Hilux truck for the majority of the day in his garage even as protests grew in the airport only a block away.

According to security camera footage examined by Reuters and his autopsy, he was shot in the chest at 5.56 p.m. that day and would die by 6 a.m. the following morning. He was one of ten individuals killed in the city during the bloodiest violence to erupt in Peru in recent weeks.

The protests, the worst in years even in tumultuous Peru, have seen 22 people killed, the youngest just 15. The deaths threaten to keep anger fired up despite a lull in violence over the festive period in the heavily Catholic country.

The clashes with the Dec. 7 ouster of former president Pedro Castillo after he tried to illegally dissolve Congress to avoid an impeachment vote he feared losing. He was voted out of office shortly after and arrested for alleged “rebellion”. He denies the charges.

His arrest triggered an outpouring of anger at the country’s political elite and Congress, widely reviled as corrupt and self-serving, especially in Peru’s poor southern mining regions where rising food and energy costs have hit people hard.

As new President Dina Boluarte tried to stem the protests, which saw blockades of highways, buildings set on fire and airports invaded, the government declared a nationwide state of emergency on Dec. 14, curtailing some civic rights and allowing the armed forces to support the police maintaining public order.

A day later on Dec. 15 protesters in Ayacucho invaded the runway of the regional airport, a block away from Prado’s garage, where he lived and worked on Calle Los Angeles, which ran parallel to the airstrip. The airport was forced to suspend flights.

The army was sent in to wrest back control.

A security camera near the airport shows protesters invading the runway around 2 p.m., some throwing rocks and burning tires while troops gathered. Military helicopters circled above. The public ombudsman said gas grenades were thrown onto protesters below.

By 5 p.m. the violence spread outside the limits of the airport, and the shooting in the streets began. By the end of the night the clashes would leave 10 people dead or fatally wounded. The most recent died on Dec. 21.

At 5.55 p.m., security camera footage from a store on Calle Los Angeles opposite Prado’s home shows a group of protesters and others standing in the street.

The crowd is suddenly startled by something off camera and starts running. On the sidewalk on the far side of the road a person falls and lies still. A group of people come to check on the person, including Edgar who is seen walking the opposite way from the crowd and seemingly out of the entrance to his home. He kneels over the person and stays with them while others run off.

The video then shows Edgar being shot and collapsing a minute later. According to his autopsy, he passed away the following morning on December 16 from hemorrhagic hypovolemic shock, pulmonary and hepatic lacerations, and open chest injuries brought on by a gunshot to the chest.

His sister Edith told Reuters that he had not participated in the protests and that the military was “supposed to be trained to fight terrorism, not sacrifice the lives of our inhabitants.” “The military essentially assassinated him.”

She claimed that Edgar left the home they both share after gunfire struck their fence and he witnessed injured protestors, a claim that seems to line up with video obtained by Reuters. She displayed to Reuters the door frame damage and bullet casings.