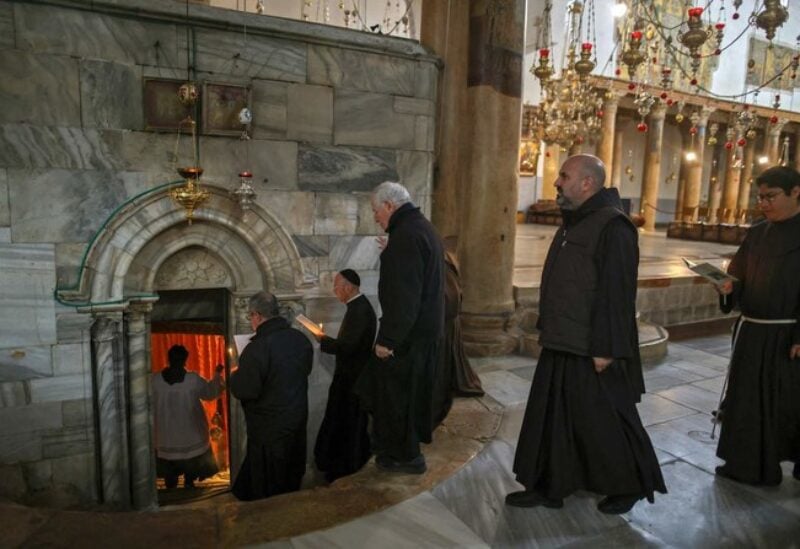 Despite a recent surge in COVID-19 cases, Bethlehem musicians have been fine-tuning their last preparations for a famous tourist procession on December 24.

Orchestras and scout groups are expected to play at a number of significant spots throughout the Palestinian West Bank city’s Christmas celebrations, including the area in front of the Church of the Nativity, where Christians believe Jesus Christ was born.

The parade usually starts early in the morning and lasts until midnight mass. However, due to the coronavirus epidemic, it will visit fewer places this year than in prior years.

Despite an increased vaccination program in the Palestinian territories, the arrival of the omicron variant looks likely to set back any significant revival of Bethlehem’s tourism trade.

But resident Samer Hodley, 47, said people remained upbeat. “Although people are feeling frustrated again, we are enjoying the atmosphere and spirit of Christmas.”

Some visitors from overseas, and Palestinians from Israel and other cities in the West Bank and Gaza Strip, were still expected to visit Bethlehem.

Anton Salman, Bethlehem’s mayor, said that despite fears about a new wave of COVID-19 infections, the festive celebrations would go ahead as planned.

“Bethlehem and its people deserve to feel the joy of the birth of Christ,” he added.
The Church of the Nativity has been the focal point of Christmas celebrations for centuries and attracts visitors from around the world.

Fr. Francisco Pato said: “Despite the bad news of the appearance of the omicron mutation, we hope that pilgrims will return and celebrate with the Christians here.”

Christmas in Bethlehem is celebrated on different dates because of the various Christian faiths. The Catholic and Protestant churches mark the occasion on Dec. 24, while the Orthodox church does so on Jan. 7, followed by the Armenian celebrations.

The expected dip in tourists has had a serious impact on Bethlehem’s economy.

Loreen Sabbagh, owner of an antique shop, said: “Bethlehem has collapsed economically due to the cessation of foreign tourism in recent years. But foreign and domestic tourism has begun to pick up again, albeit slowly.”

Salman said: “Sixty-seven hotels, 170 stores for oriental antiquities, and dozens of restaurants and facilities closed due to the pandemic, but they have begun to recover.”

Bethlehem has always relied heavily on tourism and every year the municipality organizes a Christmas market to provide a platform for locals to promote their products.

Carmen Ghattas, director of public relations for the municipality, said: “The Christmas market is an opportunity for those affected by the pandemic and the closures to boost their business. We want to be happy, the pandemic will not stop us, and we will take preventive measures to restore tourism to the city of Bethlehem.”

Tourist Najwan Safi was pleased to be back in Bethlehem after a hiatus of two years. She and others gathered in Manger Square to take pictures beside the Christmas tree there.

“I used to come to Bethlehem every year to attend the Christmas celebrations, but this year, because of the new variant, we could only visit the market and take pictures in front of the Christmas tree. We deserve joy and happiness,” she said.