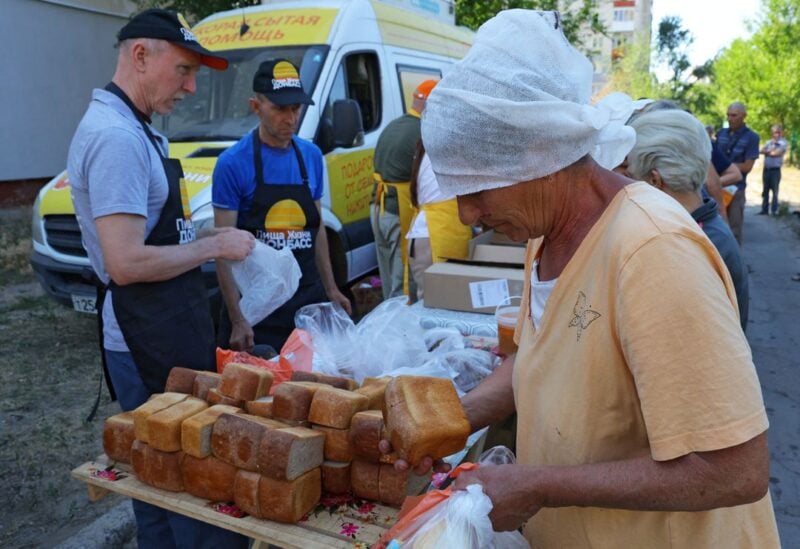 Volunteers distribute food to local residents during Ukraine-Russia conflict in the city of Sievierodonetsk in the Luhansk Region, Ukraine June 30, 2022. REUTERS/Alexander Ermochenko

Jose Andres asked for greater coordination of food relief efforts in the nation ahead of what is forecast to be a harsh winter. His World Central Kitchen organization has delivered more than 130 million meals in Ukraine since Russia’s invasion in February.

He cautioned that as the war dragged on, donations were declining, forcing WCK, which offers short-term emergency help, to begin winding down operations just as cold weather is set to make issues facing millions of displaced Ukrainians worse.

Andres, whose work was hailed by Ukrainian President Volodymyr Zelenskiy on Thursday in a televised address that usually focuses on the battlefield and diplomacy, is visiting some of WCK’s 7,500 distribution sites in Ukraine this month to drum up support for continued food relief in the country.

“The cash is sooner or later going to start finishing, that’s why I’m calling on … all the countries that want to support Ukraine…that we need to become one,” he told Reuters this week at a distribution site in Irpin, a city near Kyiv.

Irpin was reclaimed by Ukrainian forces after Russian attacks that killed nearly 300 people in early March.

“If everybody is doing their own thing, we may be doubling efforts, wasting money, not helping Ukraine, especially as winter is coming,” the Michelin-starred Spanish chef added.

The United Nations estimates that at least 12 million people have fled their homes in Ukraine since the invasion, with more than 5 million heading to neighbouring countries and 7 million believed to be displaced inside the country itself.

WCK started feeding people at the Polish-Ukrainian border a day after what Russia terms a “special military operation”, and soon expanded its work in Ukraine as people waited, often for days, to flee bombarded areas.

Andres, who met Zelenskiy in Kyiv on Thursday, said 5,000 volunteers had prepared and served millions of meals in Ukraine since then.

Food needs could spike again as Ukrainian authorities look to relocate up to 350,000 people in the eastern Donbass region of the country where fighting has been intense.

Zelenskiy said he and his government had agreed with Andres to “widen the scope of WCK’s humanitarian mission, especially in the areas that step by step are being liberated from under Russian occupation”. Further details were not immediately available.

Andres said his group was quicker and more agile than bigger institutions like the United Nations World Food Programme in responding to disasters, but was seeking to partner with such bodies to continue its robust food deliveries in Ukraine.

The chef, who helped popularise Spanish tapas in the United States and founded WCK after the 2010 earthquake in Haiti that killed more than 200,000 people, said Ukraine’s problems were a global concern given its role as a key exporter of grains worldwide.

He said WCK might have held back some of the $250 million it spent to prepare meals there, if it had known that its services would be required longer, but all the meals it had served were needed at the time.