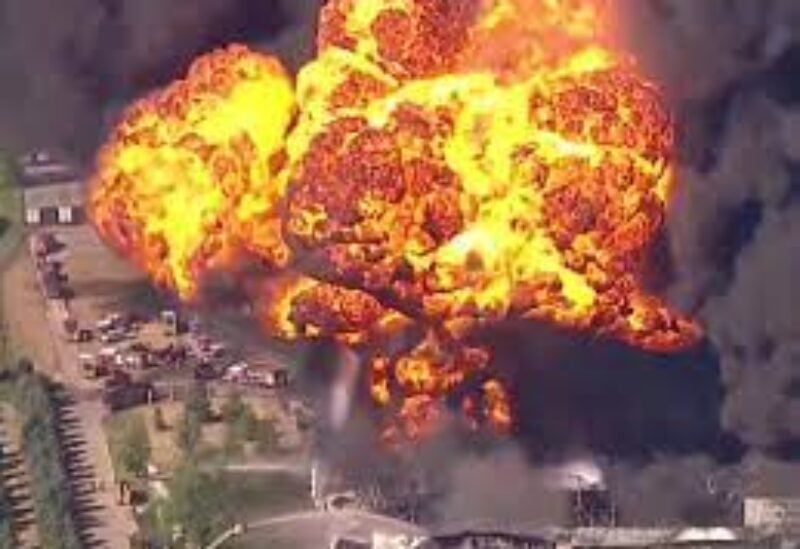 An explosion at a northern Illinois chemical plant Monday morning sparked massive fires that sent flames and huge plumes of thick black smoke high into the air and debris raining onto the ground, prompting evacuations.

After 7 a.m., emergency crews rushed to the scene of the fire near Rockton, northwest of Chicago, at Chemtool Inc., a company that manufactures lubricants, grease products and other fluids, and is, according to the company, the largest manufacturer of grease in the Americas.

Rockton Fire Department Chief Kirk Wilson said about 70 employees who were at the plant when firefighters arrived were evacuated safely, and that one firefighter suffered a minor injury. Chemtool’s parent company, Lubrizol Corp., later said there were closer to 50 employees present when the plant was evacuated.

Following reports that the plumes of smoke were so big they were being picked up on weather radar, the Rockton Police Department posted an alert at 8:46 a.m. warning that fire officials had ordered a mandatory evacuation near the plant. It told people to evacuate homes and businesses, and to await further instructions.

Rockton Fire Chief Kirk Wilson said crews are letting the fire burn itself out, rather than pouring any more water on it, out of concern about chemical runoff into the nearby Rock River. Wilson said it could take a matter of days for the fire to completely burn itself out.

“That’s the best thing that we can do right now,” Wilson said. “The main thing is that we don’t want an environmental nightmare to occur, and the reason that we would cause that is by the use of water streams. So we stopped water operations at this point.”

Wilson said crews also have been conducting air quality tests, and have determined there is no danger to air quality at ground level.

“I assure you that there is no danger at ground level at the plant, but just for a precautionary measure, we decided that it was in the best interests of community safety that we evacuated the area,” he said.

Wilson said the fire was already burning through the roof of the plant when the first crews arrived, and at that point there was no stopping it. He said the plant already has been “pretty much consumed” by the fire.