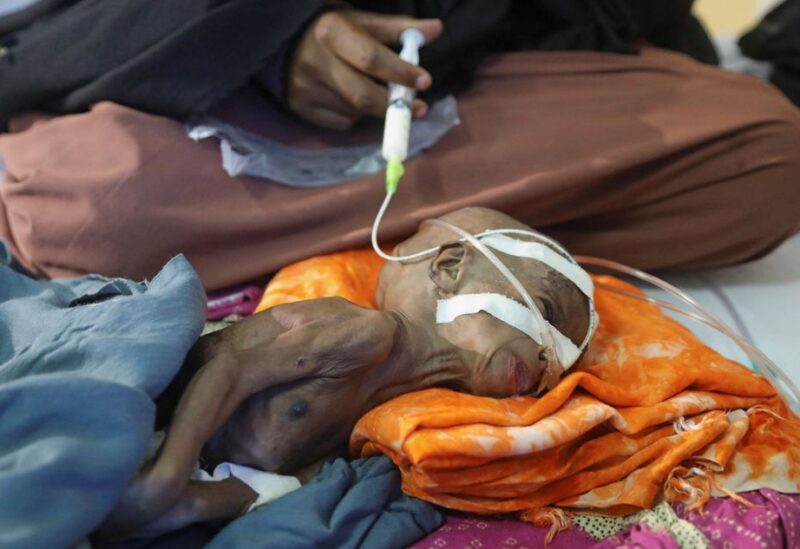 Zamzam Jamac, a Somali woman displaced by the worsening drought due to failed rain seasons, feeds her child Fatuma Botan, 1, through a nasogastric tube at the paediatric ward in the Banadir Hospital, in Mogadishu, Somalia September 24, 2022. REUTERS/Feisal Omar

Acute malnutrition is on the rise among children displaced by drought and conflict in a region of central Somalia on the verge of famine, according to a humanitarian survey.

The UN warned in early September that two districts in Somalia were on the verge of famine between October and December, with more than 500,000 children at risk of dying from malnutrition.

A screening conducted from Sept. 19-24 by U.N. agencies and other humanitarian groups in camps for internally displaced people in the Baidoa district found the situation quickly deteriorating.

Of more than 98,000 children screened between the ages of 6 and 59 months, 59% were suffering from acute malnutrition, including 24% whose cases were classified as severe, the report seen by Reuters shows.

A previous screening in June and July found 28.6% of children in the camps were suffering from acute malnutrition, including 10.2% with severe cases.

The two screenings used different methodologies, so the figures cannot be directly compared, but aid workers said the results clearly indicate a steep rise in hunger since July despite a massive scale-up of food aid.

“These very high malnutrition rates from the mass screenings are alarming and indicative of a rapidly deteriorating situation,” said Petroc Wilton, head of communications in Somalia for the World Food Programme (WFP), one of the U.N. agencies involved in the survey.

The last four rainy seasons in the Horn of Africa region have failed, making this the worst drought in 40 years. The crisis has been exacerbated by attacks by al Shabaab Islamist militants and high global food prices.

An area is considered to be experiencing famine when at least 30% of children are suffering from acute malnutrition, at least 20% of households face an extreme lack of food, and at least two out of every 10,000 people are dying each day from malnutrition or related diseases, according to the Integrated Food Security Phase Classification (IPC) Initiative.

The initiative involves the United Nations, non-governmental organisations and governments. An IPC Famine Review Committee of four to six independent experts is responsible for approving any famine declaration.

In Somalia’s last famine in 2011, half of the more than 250,000 victims were later determined to have died before the famine was officially declared.