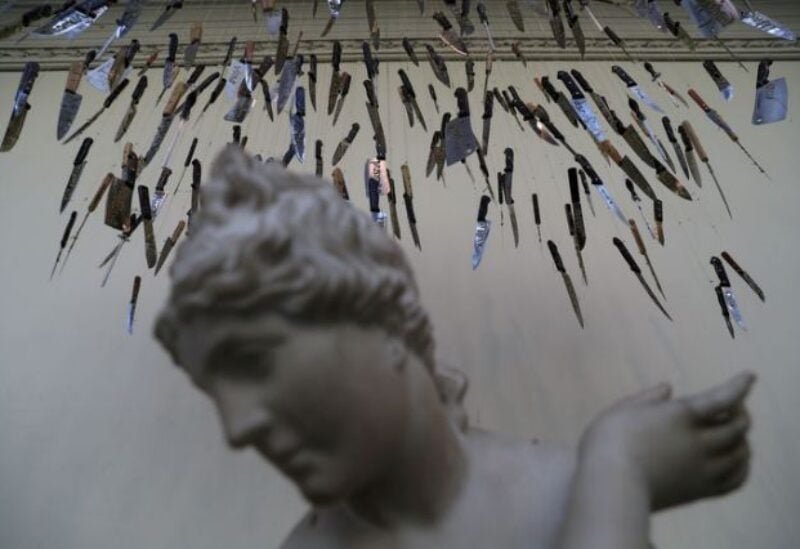 FILE PHOTO: Knives hang over Ernesto Gazzeri's sculpture 'Venus arrodillada' (kneeling Venus) in Chilean artist Catalina Mena's metaphor of domestic violence and the fragility of the human condition, according to the organizer, during the International Women's Day at the National Fine Arts Museum in Santiago, Chile March 8, 2021.

Behind her, a man yells out the price of corn. Another is selling rabbits. One woman vents about shoulder pain. A few tell her they have no time.

Dorador became drawn to the microorganisms that have survived for millions of years in the salt flats. “We can learn a lot of things about climate change studying the salares, because they are already extreme,” she said. “You can find clues of the past and also clues of the future.”

Dorador is vying to be the convention’s president. She wants the constitution to recognize that “humans are part of nature.” She bristles when asked if lithium extraction is necessary to pivot away from fossil fuel extraction. Of course, the world should stop burning oil and gas, she said, but not by ignoring yet-unknown ecological costs. “Someone buys an electric car and feels very good because they’re saving the planet,” she said. “At the same time, an entire ecosystem is damaged. It’s a big paradox.”

Indeed, the questions facing this Convention are not Chile’s alone. The world faces the same reckoning as it confronts climate change and biodiversity loss amid widening social inequities: Does the search for climate fixes require reexamining humanity’s relationship to nature itself?

“We have to face some very complex 21st-century problems,” said Maisa Rojas, a climate scientist at the University of Chile. “Our institutions are, in many respects, not ready.”