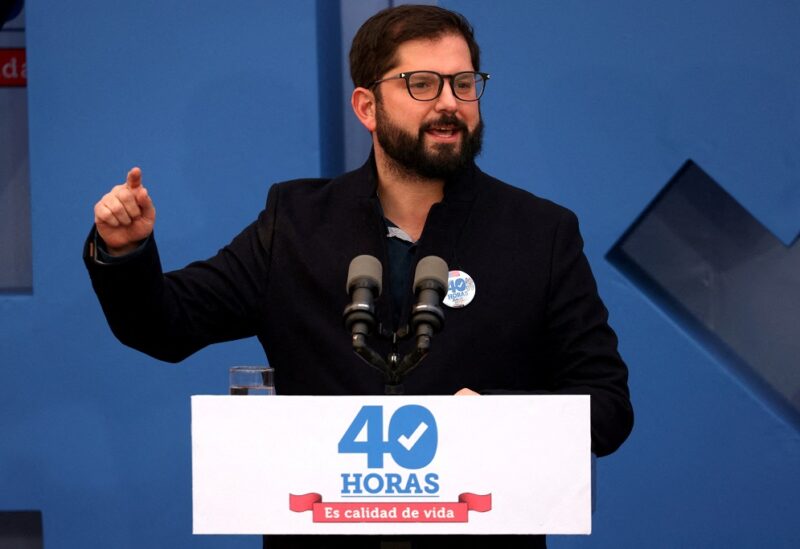 A slogan is seen as Chile's President Gabriel Boric delivers a speech on a bill which aims to reduce the working week in the country from 45 to 40 hours, at the government house in Santiago, Chile August 23, 2022. The slogan reads '40 hours is quality of life'. REUTERS/Ivan Alvarado

Chilean President Gabriel Boric’s administration announced on Tuesday that it has resurrected efforts to adopt legislation that would shorten working hours in the country and fulfill a campaign pledge.

Since it was submitted in 2017 by then-lawmaker and current government spokesperson Camila Vallejo, the plan, which intends to cut the working week from 45 to 40 hours in five years, has been stuck in Congress.

Boric has given “urgency” to the bill, a provision in Chile’s constitution that forces lawmakers to consider a bill when mandated by the president.

Lawmakers will debate a series of changes to the bill made by Boric’s government, including a revision extending the reduction in working hours to workers in special categories, such as public transport drivers and domestic workers.

“These improvements are essential to bringing us closer to a new Chile, one that is fairer,” Boric said during a ceremony Tuesday at the presidential palace.

The center-left government has promoted dialogue with unions and worker federations along with representatives from small, medium and large companies at a time when the economy of the world’s largest copper producer is slowing down and faces strong inflationary pressures after a rapid post-pandemic recovery.

Boric said his government expected the bill to be voted on and approved as soon as possible by both legislative houses.