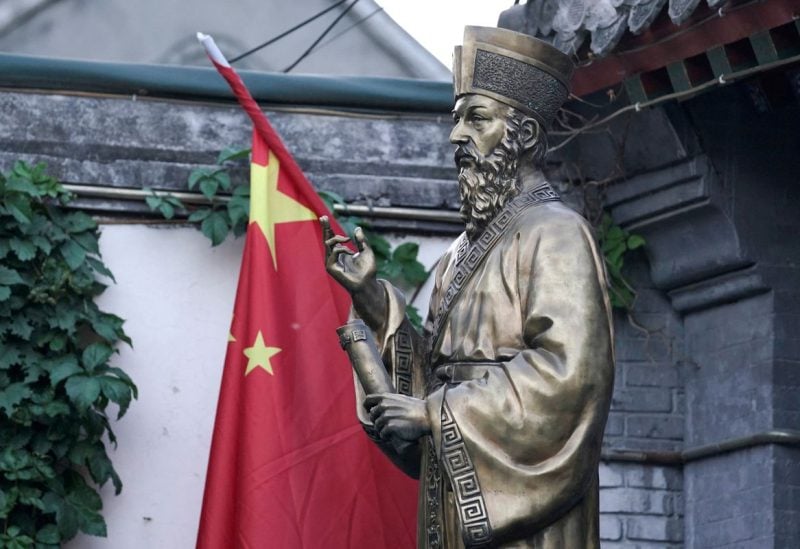 A Chinese flag is seen next to the statue of Italian Jesuit Matteo Ricci, the first builder of church during the Ming Dynasty, at the entrance of Beijing South Catholic Church, a government-sanctioned Catholic church, in Beijing, China September 29, 2018. REUTERS/Jason Lee/File Photo

China on Thursday accused a committee of British lawmakers visiting Taiwan of “gross interference” in China’s internal affairs and threatened a forceful response to anything that undermines Chinese interests.

The Chinese embassy in Britain issued a statement responding to the ongoing visit to Taiwan by the British parliament’s Foreign Affairs committee, calling it a “flagrant violation” of the one-China principle.

China claims the self-ruled, democratic island of Taiwan as its own territory, part of its “one China” policy. Taiwan’s government rejects China’s sovereignty claims.

“The Chinese side urges the UK side to abide by its commitment, stop any actions that violate the one-China principle, and stop interfering in China’s internal affairs,” the spokesperson said in a statement posted on Twitter.

“Moves of the UK side that undermine China’s interests will be met with forceful responses from the Chinese side.”

The spokesperson said the visit sent the wrong signal to those who want Taiwan to be independent.

The committee met with Taiwanese Premier Su Tseng-chang on Thursday and is due to see President Tsai Ing-Wen on Friday.

Britain’s diplomatic relations with China have been in decline for several years, embroiled in rows over human rights, economic policy and China’s approach to former British colony Hong Kong.

On Monday Prime Minister Rishi Sunak said Beijing’s systemic challenge to Britain’s interests and values was growing more acute, and that he would confront international competitors “not with grand rhetoric but with robust pragmatism”.

SHIFTING POLICY
The visit is part of the committee’s work examining a shift in British foreign policy towards the Indo-Pacific region, which the government has identified as an economic and diplomatic priority since leaving the European Union.

The committee is a parliamentary body, separate from government and made up of elected lawmakers (MPs) from a range of parties. It scrutinises government policy but does not have statutory powers.

“It is entirely right that democracies engage in dialogue with one another,” committee chairwoman Alicia Kearns said in response to the Chinese statement.

“Whilst the Chinese Communist Party has chosen to shut down dialogue by sanctioning British MPs, I believe that engaging with, and listening to, our friends across the Indo-Pacific, matters.”

In March 2021, China imposed sanctions on nine Britons, including elected lawmakers, for spreading what it said were “lies and disinformation” about alleged human rights abuses in Xinjiang.

The British government did not comment on the embassy statement. Britain does not have formal diplomatic ties with Taiwan, but maintains an unofficial relationship and is committed to boosting collaboration in areas like trade.

The committee is due to meet with Tsai on Friday.

“We look forward to continuing to deepen the friendly and cooperative relations between Taiwan and the UK through this face-to-face exchange, and to continue to work together for the peace, stability and prosperity of the Indo-Pacific region,” Taiwan’s presidential office said ahead of the meeting.