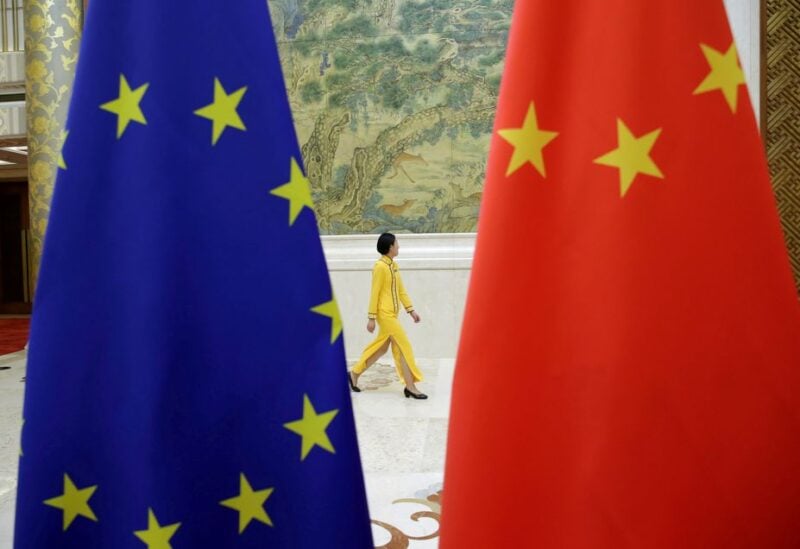 An attendant walks past EU and China flags ahead of the EU-China High-level Economic Dialogue at Diaoyutai State Guesthouse in Beijing, China June 25, 2018. REUTERS/Jason Lee/

China agreed to coordinate its economic policies with those of the European Union, to liberalize trade and investment, and to further open up its financial system, but it remained silent regarding an investment deal that had been put on hold due to disagreements about human rights, geopolitics, and the conflict in Ukraine.

Valdis Dombrovskis, executive vice president of the European Commission, and Liu He, vice premier of China, had “pragmatic,” “candid,” and “efficient” discussions during the ninth round of the trade and economic dialogue between the EU and China on Tuesday, according to a statement from the Chinese Commerce Ministry.

“The two sides will strengthen communication and coordination of macroeconomic policies, increase cooperation in global food and energy security and other fields, and jointly promote global economic and financial stability,” the Chinese ministry said of the virtual talks.

The last round of such talks took place two years ago, also led by Liu and Dombrovskis, focusing on a landmark investment pact. By the end of 2020, Brussels and Beijing had concluded the deal, following seven years of talks, but have not since ratified it.

The sanctions and counter-sanctions led the European Parliament in May 2021 to halt ratification of the investment pact, a setback for both China and the EU.

Then, in early 2022, China suspended imports from Lithuania, an EU member, after the small Baltic nation let Taiwan open a de facto embassy in Vilnius. Beijing regards Taiwan, a democratically ruled island, as its own territory.

“(China and the EU) agreed to jointly ensure the safety and smoothness of trade channels,” the Chinese ministry said.

Tensions between China and the EU deepened further over Beijing’s refusal to condemn Russia’s invasion of Ukraine. EU leaders vainly urged China in April not to “turn a blind eye” to what Russia calls a “special military operation”.