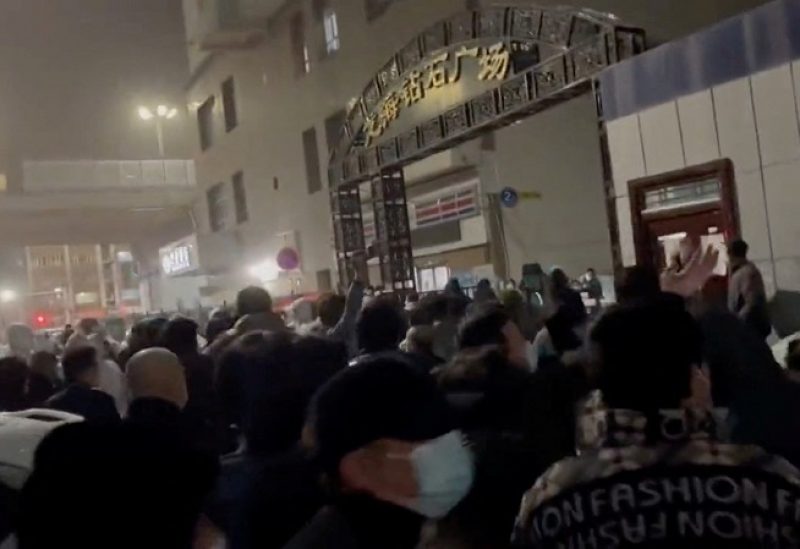 Protests against coronavirus disease (COVID-19) outbreak measures in Urumqi city, Xinjiang?Uygur, China in this screen grab?obtained?from a?video?released November 25, 2022.?Video?obtained?by?Reuters/via?REUTERS THIS IMAGE HAS BEEN SUPPLIED BY A THIRD PARTY. NO RESALES. NO ARCHIVES.

In a sign of widening public frustration at the country’s zero-COVID policy, protesters angry at China’s strict lockdowns on Sunday called for President Xi Jinping to quit.
Demonstrators in the commercial capital, Shanghai, could be heard chanting, “Xi Jinping! Step down! CCP (Chinese Communist Party)! Step down!”
“I’m here because I love my country, but I don’t love my government… I want to be able to go out freely, but I can’t. Our COVID-19 policy is a game and is not based on science or reality,” said one protester, Shaun Xiao.
Police used pepper spray to drive away demonstrators, but hours later residents returned to the same spot, only for police to break up their protest for a second time.
Several people were detained and taken away by bus.
Video footage posted to social media showed BBC Journalist Edward Lawrence being arrested while filming the Shanghai protest.
The footage shows Lawrence being set upon by several officers and dragged to the ground before being pulled up with his hands tied behind his back.
The latest protests erupted after a fire broke out Thursday and killed at least 10 people in an apartment building in Urumqi in the northwestern Xinjiang region, where some people have been locked in their homes for four months.
The tragedy spurred a wave of angry questions online about whether firefighters or people trying to escape were blocked by locked doors or other COVID measures.
In a rare direct challenge to the ruling Communist Party, the demonstrations have spread to at least seven other cities Sunday, including the capital Beijing, Wuhan and Chengdu.
In Beijing, a group of about 200 people gathered in a park on the capital’s east side and held up blank sheets of paper, a symbol of defiance against the ruling party’s pervasive censorship.
About 2,000 students at Xi’s alma mater, Tsinghua University in Beijing, gathered to demand an easing of anti-COVID controls, according to social media posts.
Other postings said there were also demonstrations at 50 universities across China.
In the central megacity of Wuhan, where the coronavirus first emerged, multiple video livestreams showed crowds walking through the streets cheering, but they were quickly censored.
Other footage showed protesters smashing through metal barricades, overturning COVID testing tents and demanding an end to lockdowns.
A large crowd also gathered in the southwestern metropolis of Chengdu, according to videos on social media.
“We don’t want lifelong rulers. We don’t want emperors,” the crowd chanted, in reference to Xi, who has scrapped presidential term limits and could now rule for life.
Earlier this week, protests turned violent at the world’s biggest iPhone factory in the Chinese city of Zhengzhou.
Social media footage showed workers being beaten by police.
The facility was placed into lockdown last month, with many workers forced to sleep inside for weeks.