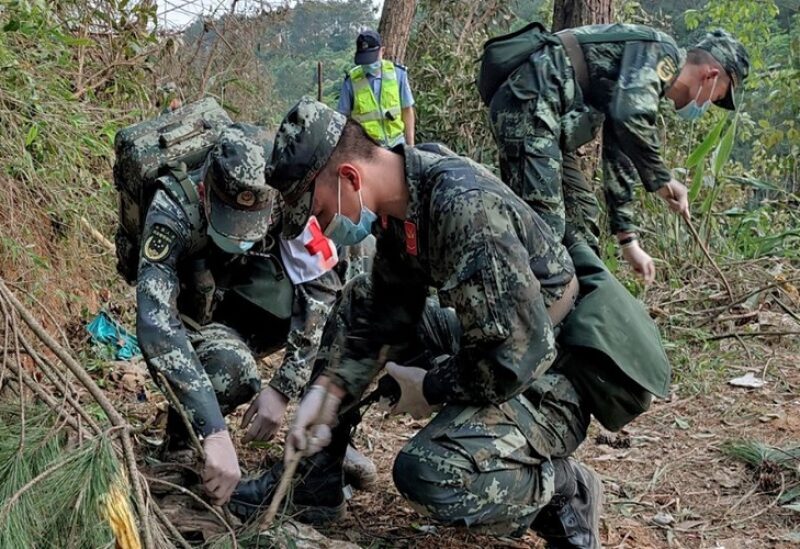 Rescuers at the site of a plane crash in southern China found burnt wreckage and personal belongings of those on board, but no sign of any survivors.

China Eastern flight MU5735 was carrying 132 people when it nosedived 30,000ft into hills in Guangxi.

The cause of the Boeing 737-800’s crash is being investigated. Recovery work has been hampered by difficult terrain.

There has been an outpouring of grief in China, where families of those on board are waiting anxiously for news.

Although the search for survivors is continuing, there has been no word of anyone found alive, while neither local media nor the authorities have reported any finding of human remains.

Hundreds of responders have been sent to the crash site in Wuzhou to scour the steeply forested slopes where debris from the crash was strewn.

Rescuers have so far found parts of the 737’s wreckage. State broadcasters showed images of the charred remains of letters, bags, wallets and identity cards belonging to those on board.

Plane debris is seen at the site where a China Eastern Airlines Boeing 737-800 plane flying from Kunming to Guangzhou crashed, in Wuzhou, Guangxi Zhuang Autonomous Region.

Meanwhile, the families and friends of the 123 passengers and nine crew have gathered at each end of the flight – with relatives visiting China Eastern’s offices in Yunnan province and waiting at Guangzhou International Airport.

The China Eastern Airlines flight from Kunming, the capital of Yunnan, had been due to land in Guangzhou on Monday afternoon.

China Eastern has grounded all its Boeing 737-800s and set up a hotline for people seeking information on those on board.

Authorities have yet to identify passengers and crew members, but some relatives have spoken to local media or shared their grief online.

One woman reported the loss of her newly-wed husband on her WeChat account. Her earlier posts included videos of the couple’s holiday trips.

Other passengers included a group of six people, one of them a teenager, who were on their way to Guangzhou to attend a funeral, a local newspaper reported.

Another woman interviewed said her sister and close friends were part of that group, adding that she had also been booked on the flight, but ended up switching to an earlier plane.

Reuters quoted a man at the airport who said he was the colleague of a passenger named Mr Tan.

After confirming that Mr Tan was on board, he had to break the news to Mr Tan’s family. “They were sobbing. His mother couldn’t believe this had happened,” he told the news agency. “Her boy was only 29 years old.”

He added that arrangements were being made by the airline to bring families to the crash site in Wuzhou.

One unverified clip circulating widely on Chinese social media shows a man slumped in his seat crying and lamenting the loss of his three children who were on the flight.