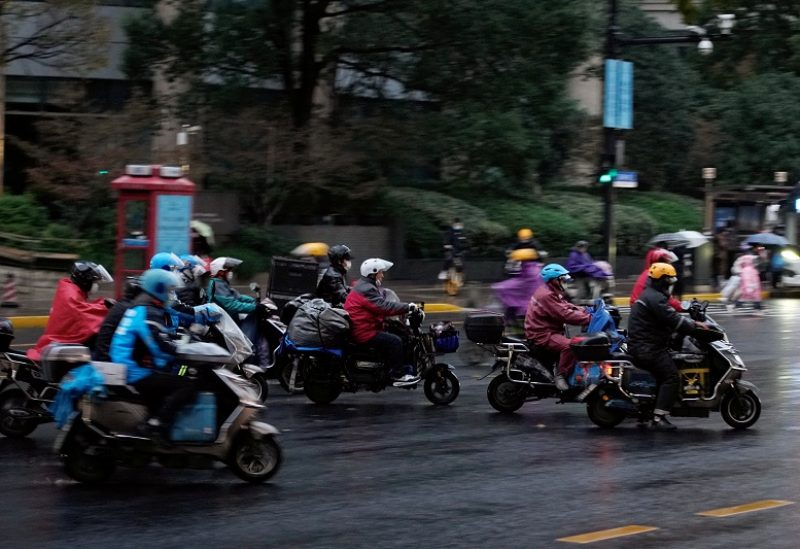 Delivery workers ride through the rain on a road, amid the coronavirus disease (COVID-19) outbreak in Shanghai, China November 30, 2022. REUTERS/Aly Song

As rallies against strict lockdown regulations continue in China, riot police and protesters clashed anew in southern Chinese city Guangzhou, online videos showed on Wednesday.
Protesters’ demands quickly escalated from anger over lockdown policies into calls for political freedom.
China’s top security body issued a warning late on Tuesday proclaiming that authorities would not shy away from a “crackdown” on “the infiltration and sabotage activities of hostile forces”, while civilian authorities stated that “illegal and criminal acts that disrupt social order” would not be accepted.
The movement is the biggest wave of civil disobedience China has seen since Tiananmen in 1989.
Videos of clashes posted on social media
A video published on Twitter showed dozens of riot police in hazard suits advancing in formation with shields over their heads. The video also showed objects being thrown at them as they step over what appears to be torn-down lockdown barriers. Several people in handcuffs were apparently taken by police to an unknown location.
A second video also showed people throwing objects at the police. In another clip, a tear gas canister lands among a small crowd in a narrow street, with people running away from the fumes.
Rare protests in China spark solidarity
Despite its draconian anti-pandemic policies, China has been posting record numbers of COVID-19 cases daily when the clashes erupted in Shanghai, Beijing and elsewhere.
Currently, China Dissent Monitor, run by US government-funded Freedom House, estimated that 27 rallies took place between Saturday and Monday, while Australian ASPI think tank recorded 43 protests in 22 cities.
Due to China’s harsh control of information and isolation, the verification of protester numbers has been challenging.
China protests ‘transformative,’ European Parliament lawmaker tells DW
Reinhard Bütikofer, lawmaker for the German Greens and chairman of the European Parliament’s delegation for relations with China, told DW that ongoing protests are different than anything seen in the past few decades.
Previous instances of opposing the regime “have been localized and single-issue,” Bütikofer said. This is the “first time … in decades” China has seen nationwide protests with participants from different backgrounds, according to Bütikofer.
“I think that is having a transformative effect on the relationship between the oppressors and the oppressed.”
With EU council president Charles Michel visiting China, Bütikofer said Michel “should also make it very clear that we are observing very intently what they [are doing in the crackdown on protesters],” he said.
Protesters angry over endless lockdowns
Anger over China’s COVID-19 lockdowns, which subsequently strangled the economy, has been the main motivation behind the protests.
China has been enforcing lockdowns of hundreds of millions of people alongside uncompromising testing and drawn-out isolation policies.
For now, infections and death numbers are low by international standards, but experts warn that a reopening could lead to widespread illness and deaths, potentially overwhelming hospitals due to China’s low vaccination rate.