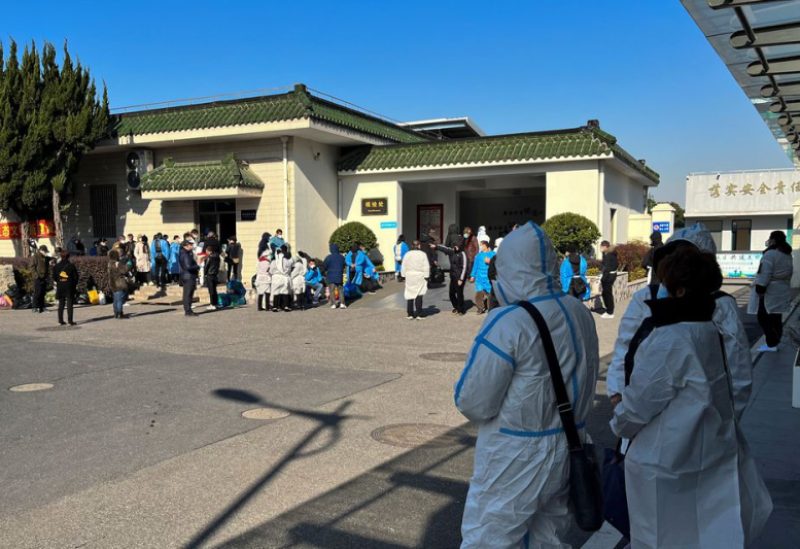 On the eve of an expected briefing later by Chinese scientists to the World Health Organization, in the day, state media in China played down on Tuesday the severity of its surge of COVID-19 infections.
China’s abrupt U-turn on COVID controls on Dec. 7, as well as the accuracy of its case and mortality data, have come under increasing scrutiny at home and abroad and prompted some countries to impose travel curbs.
The policy shift followed protests over the “zero COVID” approach championed by Xi Jinping, marking the strongest show of public defiance in his decade-old presidency and coinciding with the slowest growth in China in nearly half a century.
As the virus spreads unchecked, funeral parlours report a spike in demand for their services and international health experts predict at least one million deaths in the world’s most populous country this year.
China reported three new COVID deaths for Monday, taking its official death toll since the pandemic began to 5,253.
On Tuesday, the People’s Daily, the Communist Party’s official newspaper, cited Chinese experts as saying the illness caused by the virus was relatively mild for most people.
“Severe and critical illnesses account for 3 percent to 4 percent of infected patients currently admitted to designated hospitals in Beijing,” Tong Zhaohui, vice president of the Beijing Chaoyang Hospital, told the newspaper.
Kang Yan, head of West China Tianfu Hospital of Sichuan University, said that in the past three weeks, a total of 46 patients had been admitted to intensive care units, or about 1 percent of symptomatic infections.
The emergencies area at the Zhongshan Hospital in Shanghai was packed with patients on Tuesday, most of them elderly, a Reuters witness said. Some were in beds in the corridor, covered with blankets and receiving IV treatment, while dozens were queuing around them, waiting to be seen by a doctor. It was unclear how many were there with COVID.
’CONNECT WITH THE WORLD’
The World Health Organization has urged Chinese health officials to regularly share specific and real-time information on the COVID situation.
The WHO has invited Chinese scientists to present detailed data on viral sequencing at a Tuesday meeting of a technical advisory group. It has also asked China to share data on hospitalizations, deaths and vaccinations.
“Scientists around the world believe it to be most useful that all countries engage in testing and sequencing for variants, and to transparently and immediately share their data globally,” said Alexandra Martiniuk, an epidemiologist at the University of Sydney.
“In this respect the WHO meeting on Jan. 3 could be significant.”
The United States, France, and others will require COVID tests on travelers from China, while Belgium said it would test wastewater from planes for new COVID variants.
European Union health officials will meet on Wednesday on a coordinated response.
China has rejected criticism of its COVID data and said any new mutations may be more infectious but less harmful.
“According to the political logic of some people in Europe and the United States, whether China opens or does not open is equally the wrong thing to do,” state broadcaster CCTV commented.
A 25-year-old Shanghai resident, who only gave her last name Ruan, said she was in favor of China sharing its COVID data and working with the world to fight the disease.
“You always have to connect with the world. It’s better to study it together and prepare for the future,” Ruan said.
’DANGEROUS WEEKS’
As Chinese workers and shoppers fall ill, concerns mount about near-term growth prospects in the world’s second-largest economy, causing volatility in global financial markets.
Data on Tuesday showed China’s factory activity shrank at a sharper pace in December.
December shipments from Foxconn’s Zhengzhou iPhone plant, disrupted by worker departures and unrest amid a COVID outbreak, were 90 percent of the firm’s initial plans.
A “bushfire” of infections in China in coming months is likely to hurt its economy this year and drag global growth lower, said the head of the International Monetary Fund, Kristalina Georgieva.
“China is entering the most dangerous weeks of the pandemic,” warned Capital Economics analysts.
Mobility data suggested that economic activity was depressed nationwide and would likely remain so until infections subside, they added.
The Ministry of Culture and Tourism said the domestic tourism market saw 52.71 million trips during the New Year holiday, only 43 percent of the 2019 level, before the pandemic.
Revenue generated was more than 26.52 billion yuan ($3.84 billion), up 4 percent year-on-year but only about 35 percent of 2019 revenue, the ministry said.
Expectations are higher for China’s biggest holiday, the Lunar New Year, later this month, when some experts predict infections will have peaked in many places.
Some hotels in the tourist resort of Sanya are fully booked for the period, media reported.