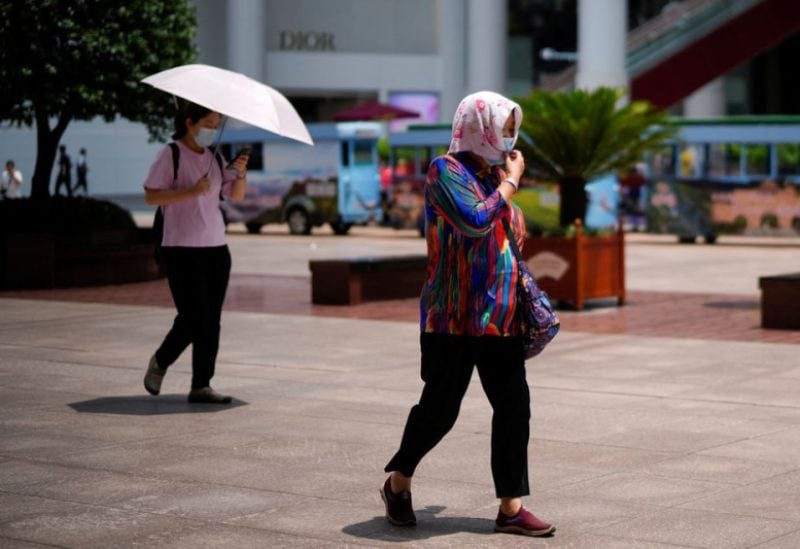 A woman covers herself with a towel and mask on a hot day, following a coronavirus disease (COVID-19) outbreak in Shanghai, China July 11, 2022. REUTERS/Aly Song

Closing off buildings, locking down districts, thus putting millions of people in distress, Chinese cities from Wuhan in the centre to Xining in the northwest are ramping up COVID-19 curbs, in an effort to stop spreading outbreaks.
China reported on Thursday that there had been more than 1,000 new Covid cases nationwide for the third day in a row, a low number compared to the tens of thousands per day that had put Shanghai on complete lockdown earlier this year, but still enough to warrant additional curbs and restrictions across the nation.
The number of cases in China have remained low by international standards, but this year’s extremely rigorous and disruptive containment measures against the highly contagious Omicron form have put a strain on the second-largest economy in the world and shook the financial markets.
As more locations were deemed high-risk in a Covid comeback that extended into its fourth week, Guangzhou, the provincial capital of Guangdong and China’s fourth-largest metropolis by economic output, blocked off more streets and neighbourhoods and kept residents inside their houses on Thursday.
This week, Wuhan, the location of the first COVID-19 outbreak in the globe, reported between 20 and 25 new cases every day. More than 800,000 residents of one district were told to remain at home until October 30 by local officials.
Following the discovery of a COVID-19 case, which officials claimed was connected to the regional pig supply chain, the sale of pork in several areas of Wuhan was also halted.
As health officials in the 2.5 million-person city rushed to contain a COVID-19 comeback after the week-long National Day holiday in early October, social media posts in Xining, the capital of Qinghai province, warned of food shortages and price inflation for necessities.
“To reduce the risk of transmission, some vegetable and fruit stores have been closed and put under quarantine,” said a Xining government official on Wednesday.
Other large cities across China including Zhengzhou, Datong and Xian have implemented new curbs this week to rein in local outbreaks.