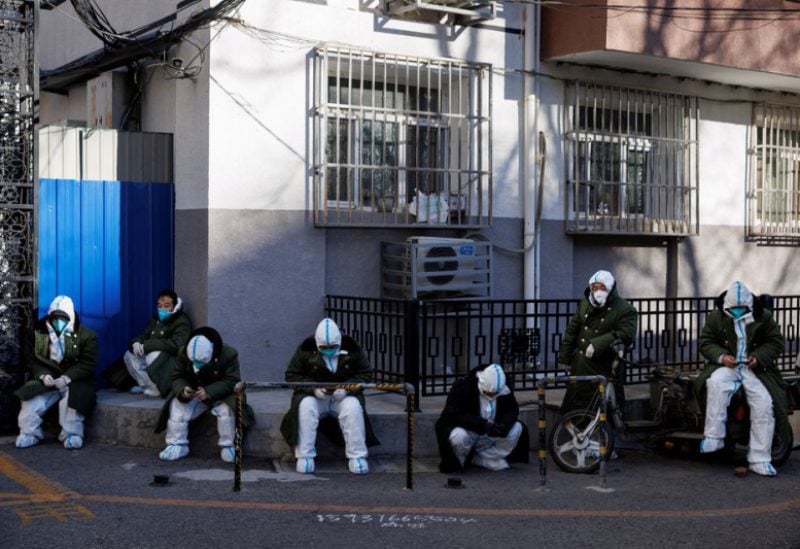 Pandemic control workers in protective suits sit in a neighbourhood that used to be under lockdown, as coronavirus disease (COVID-19) outbreaks continue, in Beijing, China December 10, 2022. REUTERS/Thomas Peter

The COVID-19 gloom in Beijing grew on Sunday with many stores and other businesses shuttered, and an expert warned of thousands of new coronavirus infections as anger over China’s earlier COVID measures gave way to concern about dealing with infection.

Following massive protests against them last month, China lifted the majority of its rigorous COVID regulations on Wednesday. However, cities already grappling with their worst outbreaks, including Beijing, saw a dramatic decline in economic activity after rules like routine testing were lifted.

Anecdotal evidence suggests that many businesses have been forced to close as infected workers quarantine at home while many other people are deciding not to go out because of the higher risk of infection.

Zhong Nanshan, a prominent Chinese epidemiologist, told state media that the Omicron strain of the virus prevalent in China was highly transmissible and one infected person could spread it to as many as 18 others.

With regular COVID testing of Beijing residents scrapped and reserved only for groups such as health workers, official tallies for new cases have plunged.

Health authorities reported 1,661 new infections for Beijing Saturday, down 42% from 3,974 on Dec. 6, a day before national policies were dramatically relaxed.

But evidence suggests there are many more cases in the city of nearly 22 million people where everyone seems to know someone who has caught COVID.

“In my company, the number of people who are COVID-negative is close to zero,” said one woman who works for a tourism and events firm in Beijing who asked to be identified as just Nancy.

“We realise this can’t be avoided – everyone will just have to work from home,” she said.

Sunday is a normal business day for shops in Beijing and it is usually bustling, particularly in spots like the historic Shichahai neighbourhood packed with boutiques and cafes.

But few people were out and about on Sunday and malls in Chaoyang, Beijing’s most populous district, were practically deserted with many salons, restaurants and retailers shut.

Economists widely expect China’s road to economic health to be uneven as shocks such as labour crunches due to workers calling in sick delay a full-fledged recovery for some time yet.

“The transition out of zero-COVID will eventually allow consumer spending patterns to return to normal, but a higher risk of infection will keep in-person spending depressed for months after re-opening,” Mark Williams, chief Asia economist at Capital Economics, said in a note.

China’s economy may grow 1.6% in the first quarter of 2023 from a year earlier, and 4.9% in the second, according to Capital Economics.

Epidemiologist Zhong also said it would be some months before a return to normal.

“My opinion is in the first half of next year, after March,” he said.

While China has removed most of its domestic COVID curbs, its international borders are still largely closed to foreigners, including tourists.

Inbound travellers are subjected to five days of quarantine at centralised government facilities and three additional days of self-monitoring at home.

But there are even hints that that rule could change.

Staff at the main international airport in Chengdu city, asked if quarantine rules were being eased, said that as of Saturday whether or not one needed to do the three days of home quarantine would depend on a person’s neighbourhood authorities.