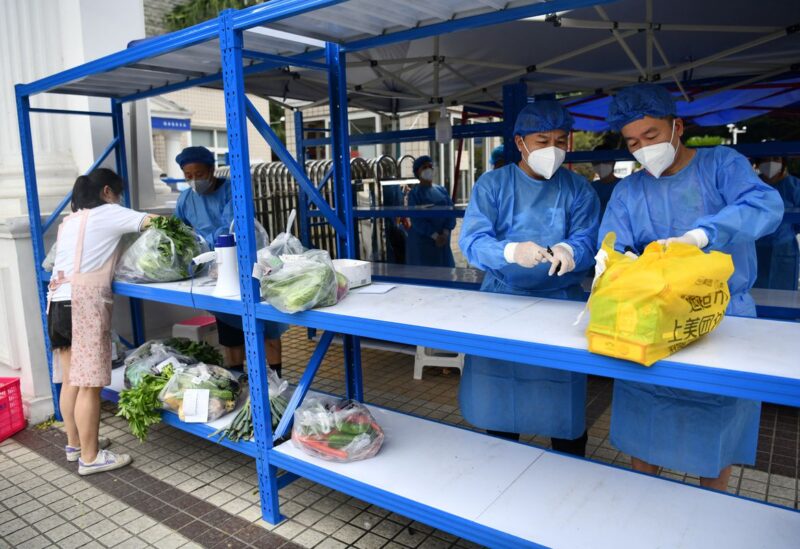 Workers in protective suits prepare to deliver food supplies placed on a rack outside a residential compound to its residents, amid a lockdown to curb the coronavirus disease (COVID-19) outbreak in Chengdu, Sichuan province, China September 2, 2022. cnsphoto via REUTERS

According to videos uploaded online, crowds of people demonstrated public displeasure over coronavirus curbs on Monday night in the southern Chinese city of Guangzhou by smashing down COVID barriers and marching down streets in disorder.

The largest of the recent outbreaks in China is in Guangzhou, where the number of COVID-19 infections each day has surpassed 5,000 for the first time, fueling fears that localized lockdowns may become more widespread.

Twitter is blocked in China, and several hashtags related to the topic of “riots” in the area were scrubbed from China’s Twitter-like Weibo by Tuesday morning.

Neither the Guangzhou city government nor the Guangdong provincial police responded to Reuters’ requests for comment.

On Tuesday, China reported 17,772 new local COVID-19 infections for Nov.14, up from 16,072 a day earlier and the most since April, even as many cities scaled back routine testing after authorities announced measures last week aimed at easing the impact of heavy coronavirus curbs.

An all-time high of 462 new illnesses were reported in Beijing on Monday. The worst-affected cities included Chongqing and Zhengzhou, two major cities.

Even so, even three years into the pandemic, China is still attempting to mitigate the harm caused by its zero-COVID policy as the most recent in a string of gloomy economic statistics revealed that retail sales declined in October and industry output increased more slowly than anticipated.

Although many locals voiced cautious hope following Friday’s declaration that parts of the strict COVID restrictions would be relaxed, worries about the growing outbreaks increased this week, and there was confusion as several localities paused or altered routine testing.