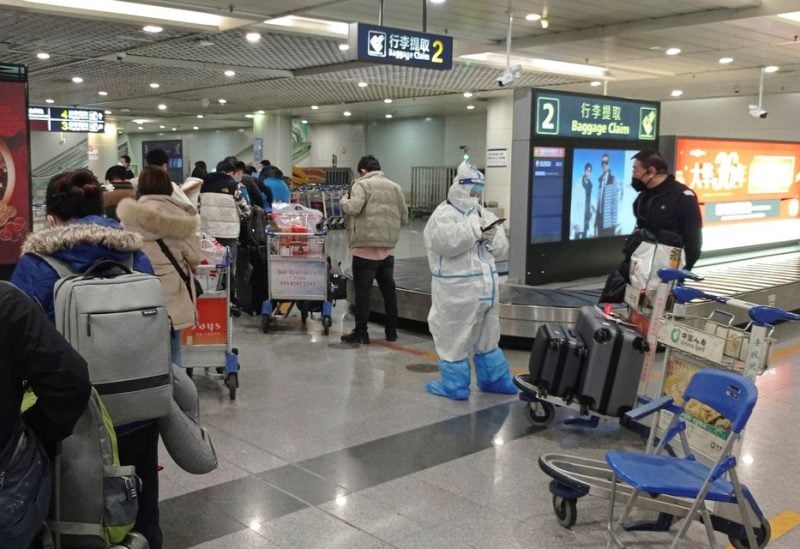 Passengers arriving on international flights wait in line next to a staff member wearing personal protective equipment (PPE) at the airport in Chengdu, China January 6, 2023. REUTERS/Staff

China began “chun yun,” the 40-day period of travel for the Lunar New Year, on Saturday, preparing for a massive increase in travelers and the spread of COVID-19 infections. Prior to the epidemic, this time of travel was renowned as the world’s largest yearly migration of people.

The first Lunar New Year public holiday without domestic travel restrictions since 2020 will begin on January 21.

Over the last month China has seen the dramatic dismantling of its “zero-COVID” regime following historic protests against a policy that included frequent testing, restricted movement, mass lockdowns and heavy damage to the world’s No.2 economy.

Investors are hoping that the reopening will eventually reinvigorate a $17-trillion economy suffering its lowest growth in nearly half a century.

But the abrupt changes have exposed many of China’s 1.4 billion population to the virus for the first time, triggering a wave of infections that is overwhelming some hospitals, emptying pharmacy shelves of medicines and causing long lines to form at crematoriums.

The Ministry of Transport said on Friday that it expects more than 2 billion passengers to take trips over the next 40 days, an increase of 99.5% year-on-year and reaching 70.3% of trip numbers in 2019.

There was mixed reaction online to that news, with some comments hailing the freedom to return to hometowns and celebrate the Lunar New Year with family for the first time in years.

Many others, however, said they would not travel this year, with worry of infecting elderly relatives a common theme.

“I dare not go back to my hometown, for fear of bringing the poison back,” said one such comment on the Twitter-like Weibo.

There are widespread concerns that the great migration of workers in cities to their hometowns will cause a surge in infections in smaller towns and rural areas that are less well-equipped with ICU beds and ventilators to deal with them.

“It’s necessary to provide convenient services, accelerate vaccination for the elderly in rural areas and the construction of grassroots lines of defense.”

Some analysts are now saying the current wave of infections may have already peaked.

Ernan Cui, an analyst at Gavekal Dragonomics in Beijing, cited several online surveys as indicating that rural areas were already more widely exposed to COVID infections than initially thought, with an infection peak already reached in most regions, noting there was “not much difference between urban and rural areas.”

On Sunday China will reopen its border with Hong Kong and will also end a requirement for travellers coming from abroad to quarantine. That effectively opens the door for many Chinese to travel abroad for the first time since borders slammed shut nearly three years ago, without fear of having to quarantine on their return.

More than a dozen countries are now demanding COVID tests from travellers from China. The World Health Organisation said on Wednesday that China’s COVID data underrepresents the number of hospitalisations and deaths from the disease.

Chinese officials and state media have defended the handling of the outbreak, playing down the severity of the surge and denouncing foreign travel requirements for its residents.

On Saturday in Hong Kong, people who had made appointments had to queue for about 90 minutes at a centre for PCR tests needed for travel to countries including mainland China.

TREATMENT TO THE FORE

For much of the pandemic, China poured resources into a vast PCR testing program to track and trace COVID-19 cases, but the focus is now shifting to vaccines and treatment.

In Shanghai, for example, the city government on Friday announced an end to free PCR tests for residents from Jan. 8.

A circular published by four government ministries Saturday signalled a reallocation of financial resources to treatment, outlining a plan for public finances to subsidise 60% of treatment costs until March 31.

Meanwhile, sources told Reuters that China is in talks with Pfizer Inc to secure a licence that will allow domestic drugmakers to manufacture and distribute a generic version of the U.S. firm’s COVID antiviral drug Paxlovid in China.

Many Chinese have been attempting to buy the drug abroad and have it shipped to China.

On the vaccine front, China’s CanSino Biologics Inc announced it has begun trial production for its COVID mRNA booster vaccine, known as CS-2034.

China has relied on nine domestically-developed vaccines approved for use, including inactivated vaccines, but none have been adapted to target the highly-transmissible Omicron variant and its offshoots currently in circulation.

The overall vaccination rate in the country is above 90%, but the rate for adults who have had booster shots drops to 57.9%, and to 42.3% for people aged 80 and older, according to government data released last month.

China reported three new COVID deaths in the mainland for Friday, bringing its official virus death toll since the pandemic began to 5,267, one of the lowest in the world.

International health experts believe Beijing’s narrow definition of COVID deaths does not reflect a true toll, and some predict more than a million deaths this year.