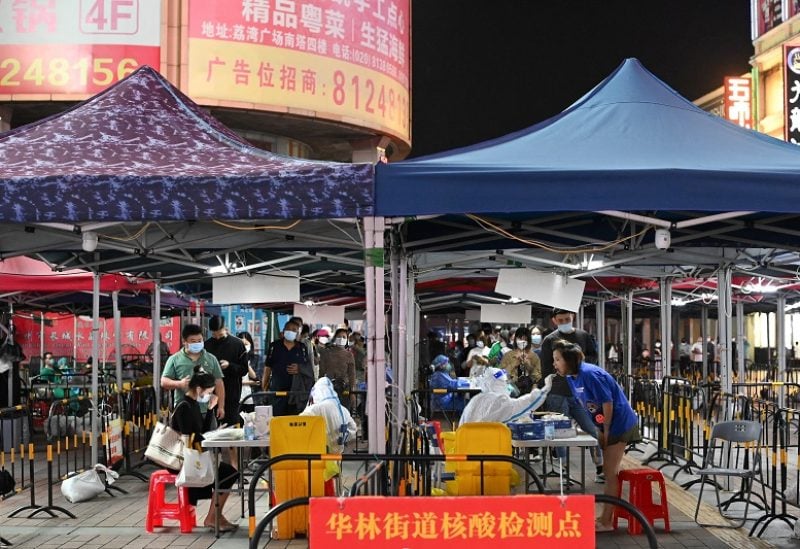 People line up to take nucleic acid test for the coronavirus disease (COVID-19) following the outbreak, at a makeshift testing site in Guangzhou, Guangdong province, China November 9, 2022. cnsphoto via REUTERS ATTENTION EDITORS - THIS IMAGE WAS PROVIDED BY A THIRD PARTY. CHINA OUT.

With China once again imposing lockdowns in various parts, people of Guangzhou decided to voice their displeasure.
According to videos and pictures circulating on social media, hundreds of people in one of China’s biggest cities were out on the streets to protest against the lockdown. The group of people marched in the Haizhu district, and the video showed that some even pushed over the police barriers.
The Hong Kong Economic Journal reported that there were several other protests around the area and the authorities along with the police arrived at the protest sites to control the situation.
While there was no mention of such protests in the national media, videos were posted on social media platforms like Weibo and WeChat. The hashtags like “Guangzhou Haizhu district riot” and “Haizhu riot” were also trending on the platforms in the aftermath of the protests.
The lockdown was imposed after a recent surge in Covid cases around the country as the Guangzhou region accounted for more than 5000 of them. With Chongqing being the worst-affected among the cities in Guangzhou, the Communist Party of China has decided to increase restrictions in both Panyu and Liwan districts.