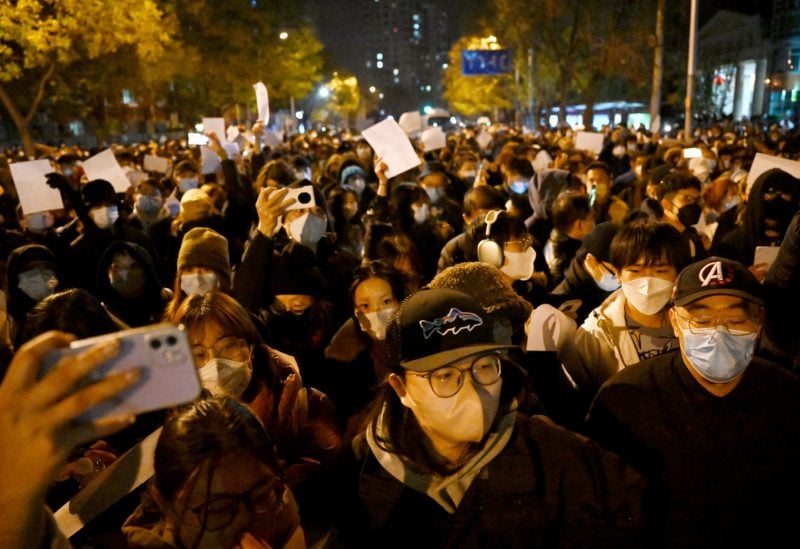 People protest against coronavirus disease (COVID-19) curbs, at the site of a candlelight vigil for victims of the Urumqi fire, in Shanghai, China, in this screengrab from a video realeased on November 27, 2022. Video obtained by Reuters/via REUTERS

At least a dozen places worldwide have joined protests against China’s stringent zero-COVID policy and freedom-impermissible regulations as a show of support for the weekend’s unusual acts of resistance in China.

According to a Reuters count, international dissidents and students held modest vigils and protests in cities across Europe, Asia, and North America, including London, Paris, Tokyo, and Sydney.

In most cases dozens of people attended the protests, though a few drew more than 100, the tally showed.

The gatherings are a rare instance of Chinese people uniting in anger at home and abroad.

The protests on the mainland were triggered by a fire in China’s Xinjiang region last week that killed 10 people who were trapped in their apartments. Protesters said lockdown measures were partly to blame, though officials denied that.

“I think this is the normal right of people expressing their opinion. I think they should not suppress this kind of right,” said Lam, a 50-year-old Hong Kong citizen.

Dozens of students also gathered at the campus of the Chinese University of Hong Kong to mourn those who died in Xinjiang, according to video footage online.