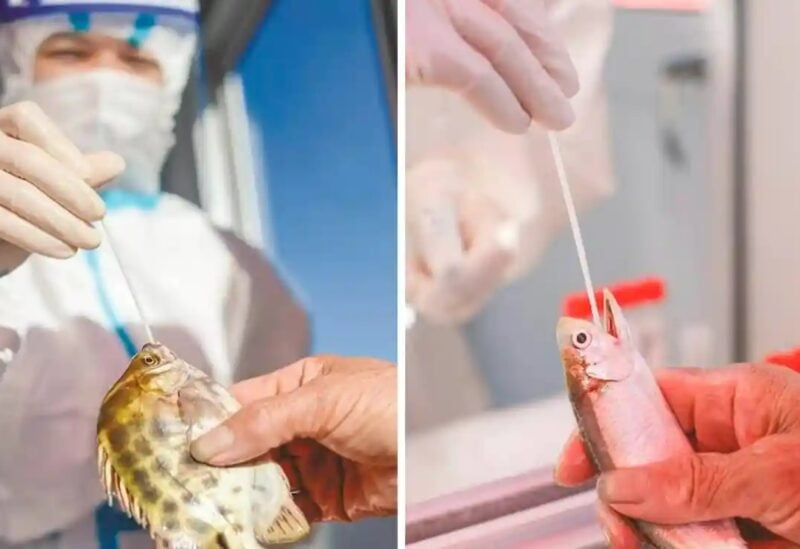 In Xiamen, coastal China, those working on fishing boats must be swabbed for Covid. Their fish must, too. Photograph: taihainet.com

The Chinese city of Xiamen has begun testing newly caught fish, shrimp, crabs, and other sea creatures for COVID-19 in an effort to combat another coronavirus outbreak, According to viral videos spreading on social media this week.

Health staff are shown inserting cotton swabs, similar to those usually used for PCR tests, into the mouths of fish and crabs, causing outrage on social media, with many claiming that the country had gone too far with its zero-COVID policy.

China has relied on mass testing, occasional snap lockdowns and extensive quarantines in an effort to curb the spread of the virus.

A notice issued by Xiamen authorities last month ordered both “fishermen and fishing goods” to be tested for COVID-19 once a week.

“If you go to sea again, you need to provide a 48-hour nucleic acid test certificate,” the notice stated, insisting that “seagoing operators must actively cooperate” with government regulations on the matter.

The authorities said that since June, “illegal trading and illegal contact” between fishermen in the Fujian province and overseas vessels lead to the spread of COVID-19 to China which caused “great social harm.”

Over five million people have been ordered to undergo COVID-19 testing in Xiamen this week after around 40 infections were confirmed, the BBC reported on Friday.

Professor Jin Dongyan from Hong Kong University’s School of Biomedical Sciences told the CNN that China’s mass testing policy on seafood was a “waste of resources.”

“They should focus on the people rather than the fish,” he said, adding that testing the fish was “completely useless” because it was highly unlikely that a fish with a COVID-19 infection could spread the virus to humans.

“It is 100 or 1,000 times more possible that these fishermen got infected by other fishermen. There’s no evidence that the fish can transmit the virus.”