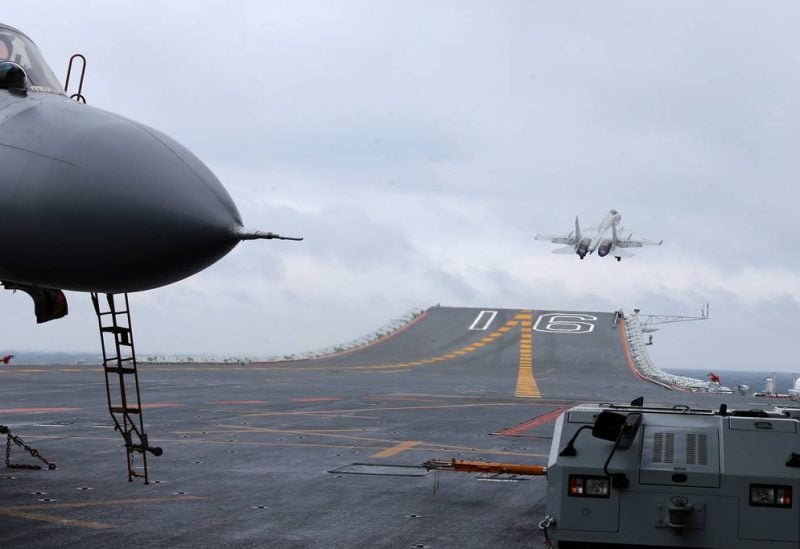 Chinese J-15 fighter jets are launched from the deck of the Liaoning aircraft carrier during military drills in the South China Sea on Jan. 2, 2017. (STR/AFP via Getty Images)

Tthe Chinese navy has conducted a number of “confrontational maneuvers” in the South China Sea since an American aircraft carrier group started to operate in the disputed waterway, according to official media.

According to a statement from the People’s Liberation Army, the Shandong aircraft carrier group of the Chinese navy engaged in “realistic combat-oriented combative exercises” in the South China Sea on Sunday (PLA).

During the drills, which simulated hostile aircraft attacks, J-15 fighter jets took off from the Shandong and carried out interception training, the PLA’s statement on Saturday said, according to the Global Times.

The carrier group also practised attack and defence on the surface, in the air and underwater, it added.

The report came after the US navy said on Friday that its Nimitz carrier strike group was carrying out exercises in the South China Sea as part of its “routine operations in the Indo-Pacific”.

Beijing claims almost the entirety of the strategic South China Sea and has established military outposts on artificial islands it has built there.

Taiwan, Vietnam, Malaysia, Brunei and the Philippines also have claims to the resource-rich waters.

Washington calls Beijing’s claims to the waterway “unlawful” and regularly sends warships through the area in what it calls “freedom of navigation” exercises.

In a statement on Friday, the US navy said the Nimitz carrier strike group — comprised of a nuclear-powered aircraft carrier, a guided-missile cruiser and three guided-missile destroyers — conducted “maritime strike training” as well as “anti-submarine operations” in the South China Sea.

The carrier strike group also carried out “integrated multi-domain and joint training between surface and air elements, and flight operations with fixed and rotary wing aircraft”, the navy said.

Chinese defence experts cited by Global Times said the US aircraft carrier’s activities in the South China Sea “have limited military significance and will only stir up tension in the region”.

The Chinese military will monitor “potentially provocative moves on China’s doorstep and the foreign forces would serve as practice partners that contribute to the PLA’s combat readiness,” the tabloid cited analysts as saying.

In December, the US military said a Chinese J-11 fighter jet intercepted one of its surveillance planes over the South China Sea, flying within six metres (20 feet) of the RC-135 aircraft and performing an “unsafe” manoeuvre. The Chinese defence ministry dismissed the US claims as “slander” and “hype”, saying it was the American pilot that had engaged in “dangerous” flying.

And in November, the Chinese navy said it drove away a US naval ship that “illegally intruded” into waters near the Spratly Islands in the South China Sea.

The encounter came days after US Vice President Kamala Harris visited the Philippines and called for freedom of navigation and overflight in the South China Sea, and pledged to launch an international campaign against “irresponsible behaviour” in the disputed waterway.