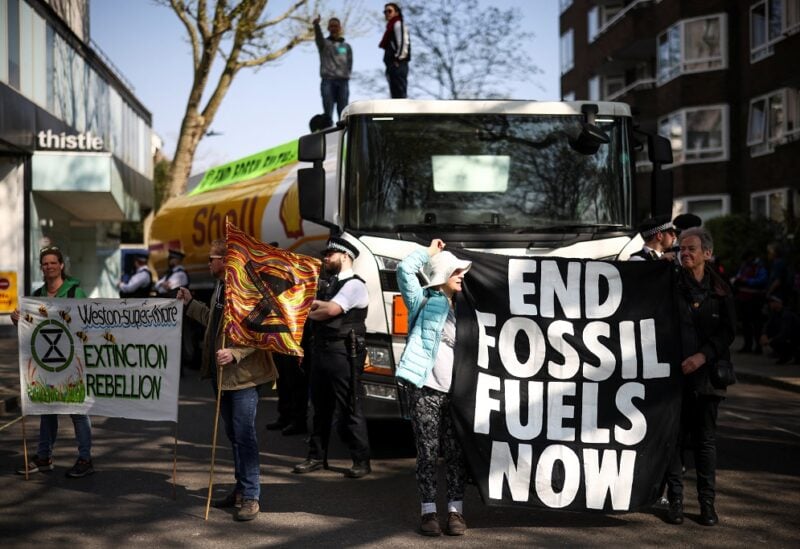 Activists from Extinction Rebellion occupy an oil tanker during a protest calling for an end to fossil fuels, in central London, Britain, April 16, 2022. (Reuters)

None of the world’s largest asset managers has issued a firm statement urging fossil-fuel corporations to halt new oil and gas projects.

Given all of the climate-conscious language emanating from Wall Street bigwigs like BlackRock Inc. Chief Executive Officer Larry Fink, one would think that the investment industry would be using all of its clout to pressure the world’s greatest polluters to limit their deadly greenhouse gas emissions.

Instead, the opposite is true.

Together, 30 of the biggest asset managers have at least $550 billion invested in oil, gas and coal companies that have expansion plans, and even more alarmingly, they continue to provide “fresh cash to companies that are ignoring climate science,” said Lara Cuvelier, sustainable investment campaigner at Reclaim Finance, a nonprofit which published a scorecard Wednesday grading investment firms on their environmental commitments.

In effect, the fund industry is “adding fuel to the fire,” she said.

And this is happening against a backdrop where the world’s leading climate finance experts and economists warn too much money is pouring into fossil fuels, putting the planet on track to blow past its limit to avoid catastrophic global warming.

The Reclaim Finance-led report also provides a checkup on an industry that unveiled the Glasgow Financial Alliance for Net Zero almost a year ago, when bankers and fund managers exclaimed how they’re committed to helping fight climate change.

Instead, Reclaim Finance found that all 30 of the fund managers’ policies and investment guidelines are “too flawed” for them to align their entire portfolios with a net-zero emissions target.

The investment firms included in the survey ranged from BlackRock and Vanguard Group Inc. in the US to Axa Investment Managers and Amundi SA in Europe.

The bottom line is “leading asset managers are kicking the can down the road without even asking companies to stop worsening the climate crisis,” Cuvelier said.

Reclaim Finance’s research found that, while none of the 30 firms ranked very well, though Natixis SA’s Ostrum Asset Management and Axa Investment Managers rated the highest.

Ostrum was singled out for its coal-exclusion policy and to a lesser extent for its oil and gas policy, and Axa for having a better engagement policy regarding the fossil-fuel sector than other firms, Cuvelier said.

“Let’s be clear,” she said. “Drilling a new oil well or opening a new coal mine isn’t a normal thing to do in a widespread climate catastrophe.”

Funds advertised as sustainable are booming, with the number of new ETFs in the lucrative space double that of last year.

But ESG investors are nevertheless getting trounced in the global credit market rout.