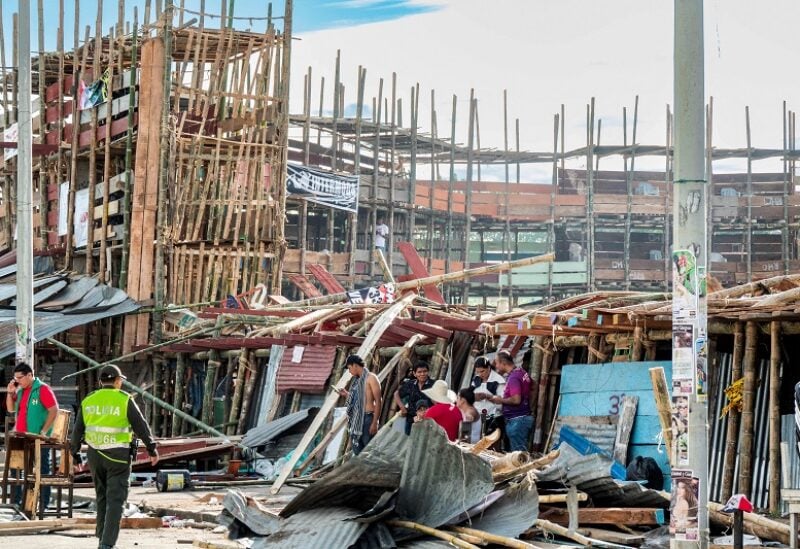 People gather near the rubble of a grandstand that collapsed in a bullring during the celebrations of the San Pedro festivities, in El Espinal, Colombia June 26, 2022. REUTERS/Cristian Parra NO RESLAES. NO ARCHIVES TPX IMAGES OF THE DAY

Colombian local authorities said on Sunday,that four people were killed and hundreds were injured after a stand collapsed during a bullfight.

The bullfight had been taking place in the municipality of El Espinal in the central Colombian district of Tolima and the regional health secretary Martha Palacios said an 18-month-old baby was among those who died.

What happened at the ring?
A three-story section of wooden stands filled with spectators collapsed, throwing dozens of people to the ground.

“Four people are among the dead at the present moment. Two women, one man and one minor,” Tolima governor Jose Ricardo Orozco told Blu Radio.

“Around 30 people have been seriously injured… this is a preliminary report, injured people are still being transferred,” the governor added.

Colombian newspaper El Tiempo reported that the bull from the fight had escaped the ring and that a state of alert had been declared in the municipality.

“We need support from neighboring hospitals and ambulances. Many people are yet to receive care,” he said.

Velez added that ambulances had been sent from the nearby cities of Ibague and Melgar to help the injured, with El Espinal’s hospital becoming overwhelmed.

While around 30 people were initially reported seriously injured, late Sunday Tolima health secretary Martha Palacios that 322 people had gone to local public and private hospitals after the collapse seeking treatment.