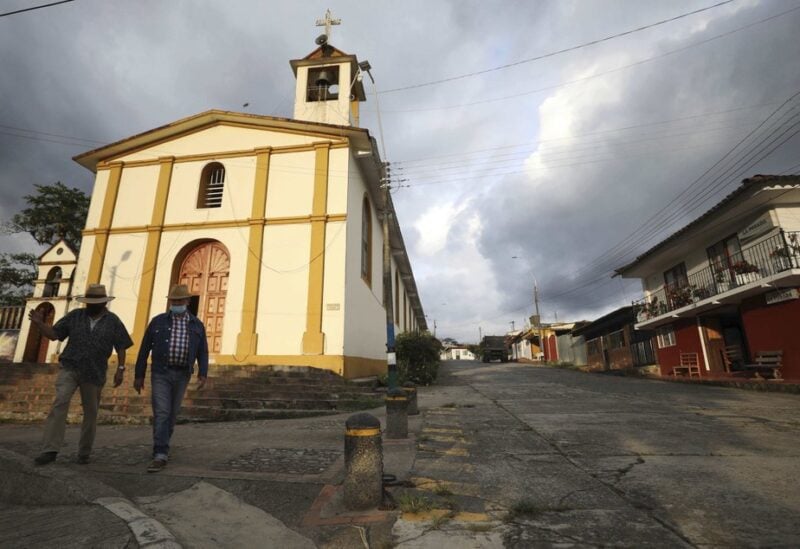 CAMPOHERMOSO, Colombia: When customers enter his hardware store Nelson Avila asks them to wear a mask and wash their hands. He sprays alcohol over the bills and coins they give him before putting them in the till.

Avila’s shop is in Campohermoso, a town of 3,000 people in Boyaca state in the mountains of central Colombia that has no reported cases of the coronavirus. According to the Health Ministry, Campohermoso county – which consists of the town and surrounding farms and villages – is one of just two counties in the country that are COVID-19-free. Colombia has more than 1,100 counties.

“Those bills can carry the virus” said Avila, 49, as he disinfects a wad of wrinkled Colombian pesos. “They go from hand to hand, so we have to be careful.”

Officials and locals say the town has been able to keep the virus away thanks to the disciplined behavior of its residents and constant campaigns urging people to social distance and wear masks.

The town’s remote location ringed by mountains, far from major roads, has also helped it to stay coronavirus-free. It has just seven streets and six avenues laid out in a neat grid. It is nestled at the bottom of a green valley, 3300 feet (about 1,000 meters) above sea level.

Given that Colombia, with a population of about 50 million people, has reported more than 2.3 million confirmed cases of the coronavirus, many consider the lack of infections here a small miracle.

During the first decade of this century, Campohermoso was affected by fighting between paramilitary groups and leftist rebels, says the town’s mayor, Jaime Rodríguez. The coffee-growing area has been peaceful for more than a decade but it is seldom visited by outsiders.

Rodríguez says communication has been crucial in keeping the pandemic away from Campohermoso. Messages about the virus and how to prevent it are broadcast three times a day on speakers perched on the town’s lampposts.

The local radio station also broadcasts daily shows that talk about prevention. To ensure everyone gets the message, the mayor’s office distributed 1,000 radios to farmers who live in Campohermoso’s rural areas.

“The whole town has come together” Rodríguez said. “The police, the health center, church personnel and the mayor’s office all go on the radio station to talk about the virus.”

Rodríguez said his message to townsfolk has been simple: “Its’ up to every family to stop it.”

He has also tried to lead by example. The mayor says he began to feel ill during a recent visit to Bogota, where he tested positive for the virus. He did not return to Campohermoso until he tested negative.

“We’ve put 60 families in town in quarantine because they showed some symptoms,” Rodríguez said. “But all of them have tested negative.”

Businesses are now open in Campohermoso and only allow customers wearing masks. The town has not banned visitors from other parts of the country but those who arrive and wish to stay have been asked to quarantine in a relative’s home, and receive a daily call from the local nurse.

Campohermoso’s only school is running at half of its usual capacity. Students have been divided by shifts and attend school every other day.

And in the largely Roman Catholic town, the local priest has also gotten involved in prevention efforts.

“We pray to Saint Roch, who is our patron saint and the protector of the sick,” says Father Camilo Monroy, who has also gone on radio to talk about ways to prevent the spread of the virus.

The only other town in Colombia that is reportedly coronavirus-free is San Juanito, which is also located in a remote valley in the Andes mountains.

Officials consider the two cases striking because the virus has even appeared in Amazon jungle villages that can only be reached by boat or small plane.

Campohermoso has vaccinated 80 people so far, most of them senior citizens over the age of 80.

Now the coronavirus-free county is waiting for more shots from Colombia’s central government.