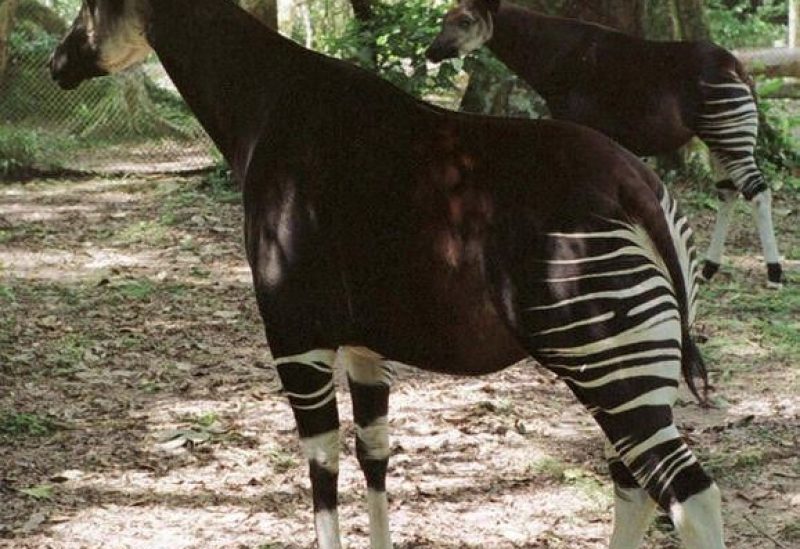 An okapi stands in the Ituri forest in the Congo. File Photo

Industrial activity are prohibited in the reserve’s 13,000 square kilometers in northeast Democratic Republic of Congo. Civil society groups said at a joint news conference to celebrate the international day of the okapi that aerial photo evidence reveals mining has continued.

The Council for Environmental Defense through Legality and Traceability (CODELT) said the ongoing destruction was at odds with the authorities’ bid to promote Congo as a major player in the global fight to curb climate change thanks to its majority share of the Congo basin rainforest – the second-largest in the world.

CODELT and regional environmental group ACEDH shared photos they said were proof that miners were gouging out swathes of jungle along the Ituri river, which loops through the southern part of the reserve that is also home to endangered forest elephants and chimpanzees

“It’s incomprehensible to see this in a country where the (the government) … presents the country internationally as a ‘solution country’,” said CODELT’s Principal Technical Advisor Augustin Mpoyi.

The environment ministry did not immediately respond to a request for comment.

The NGOs blamed a Chinese company called Kimia Mining, which has previously been accused of flouting a ban on river-dredging in Ituri province and other mining regulations, according to a 2016 report by a UN Group of Experts.

The authorities have vowed to clean up their management and protection of Congo’s forests, where illegal activities have long flourished due to corruption and the logistical challenge of enforcing weak regulations in remote and often conflict-hit areas.

Human disturbances link to conflicts, mining and hunting are among the main threats to okapi, of which fewer than 50,000 are estimated to remain in the wild, according to the International Union for Conservation of Nature (IUCN).

Also known as zebra giraffes due to their zebra striped hindquarters and longish necks, okapis were placed on the IUCN’s Red List of species at risk of extinction in 2015.

Congo is currently at loggerheads with conservationists and scientists over its plan to open other parts of its rainforest and peatlands to oil and gas drilling.