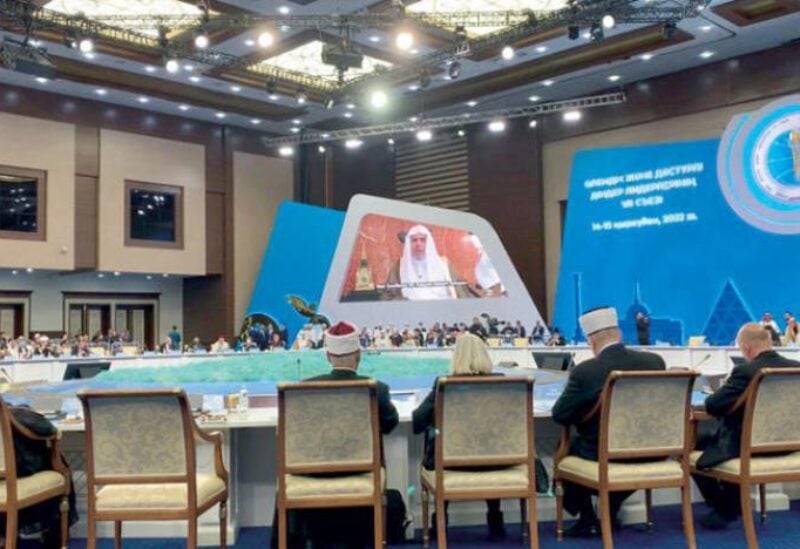 The final statement of the seventh Congress of Leaders of World and Traditional Religions praised the historic Makkah Declaration, which was signed by the grand Imams and Muftis of the Islamic world and scholars in Makkah, stressing its importance in promoting peace, dialogue, cooperation, and mutual respect, for the good of humanity.

The Congress brought together more than 100 delegations of major religious leaders influential on the international scene in the presence of Kazakh President Kassym-Jomart Tokayev.

Secretary of the Muslim World League (MWL) and Chairman of the Association of Muslim Scholars Mohammed Bin Abdul Karim Al-Issa had assigned his deputy, Abdul Rahman Al-Zayd, to represent the international Islamic NGO at the Congress’s forum activities.

In a recorded speech that was played at the Congress, Al-Issa addressed some broad headlines about the importance of “common values.”

The MWL chief also stressed that religious diplomacy is an important and influential tool in the context of promoting these values.

In the videotaped speech, Al-Issa reiterated the importance of dialogue and conscious civilizational and cultural communication, saying most conflicts throughout human history have been the result of ideas on religions, which only express the orientations of their beholders.

Islamic leaders participating in the Congress’s activities praised the Makkah Declaration as a qualitative historical achievement and a significant turning point in contemporary Islamic history.

They said that the Declaration, in its legitimate and intellectual context, embraces all Islamic sects.

The Makkah Declaration was celebrated on various international platforms with its religious and cultural diversity and was adopted by the Islamic countries at the meeting of their foreign ministers in Niamey, Niger.

The document became a reference in training imams in several countries and was considered with great appreciation for Custodian of the Two Holy Mosques King Salman, who sponsored its international conference held in Makkah in 2019, organized by MWL, and signed by 1,200 muftis and scholars and more than 4,500 Islamic thinkers.