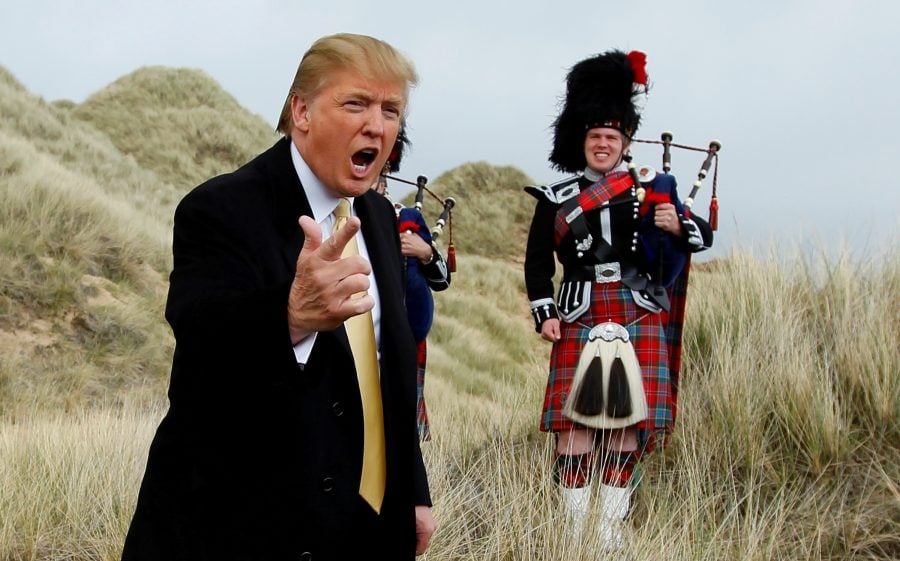 The Scottish government is facing a new legal challenge following its February dismissal of a motion to investigate former US President Donald Trump’s all-cash purchases of two golf courses, reigniting a campaign to compel Trump to reveal how he paid for them.

A petition was lodged in Scotland’s highest court by Avaaz, a global human rights organization, requesting a judicial review of the Scottish Parliament’s 89-to-32 vote against granting a “unexplained wealth order” to Trump’s business. The proposed order demanded information about the origins of the funds used by the Trump Organization to purchase the golf courses in 2006 and 2014.

The petition, which has not been previously reported, was served on Scotland’s government on Monday. It was filed with the court late on Thursday.

Trump, after decades of buying properties with debt, spent more than $300 million in cash purchasing and developing the Scottish courses, neither of which has turned a profit. Some Scottish politicians have cited mounting investigations into Trump’s U.S. financial interests as grounds to scrutinize his business dealings in Britain.

The British government introduced unexplained wealth orders in 2018 to help authorities fight money laundering and target the illicit wealth of foreign officials. The orders do not trigger a criminal proceeding. But if the Trump Organization couldn’t satisfy the court that the money was clean, the government, in theory, could seize the properties.

The 13-page petition filed by Avaaz alleges that the politicians who voted against the motion did so based on a flawed legal interpretation.

On Feb. 3, the Scottish Parliament rejected the motion seeking the order, which had been introduced by the Scottish Greens party. Before the vote, Humza Yousaf – the justice minister and a member of the ruling Scottish National Party – called Trump “deplorable” but argued that unexplained wealth orders should be instigated by law enforcement officials rather than politicians. “There must not be political interference in the enforcement of the law,” Yousaf said.

Yousaf said that the Civil Recovery Unit – an enforcement authority reporting to Scotland’s most senior legal officer, the Lord Advocate – should “undertake the investigatory role.”

Avaaz challenges that reasoning in its court action, which asks the Court of Session in Edinburgh to rule that Scotland’s ministers have sole responsibility to determine whether to apply for an unexplained wealth order and cannot delegate that responsibility to other people or institutions.

It also argued that the legal standard for issuing the wealth order against Trump had been met and that Scotland’s leaders had failed to perform their duty. If the court sides with Avaaz, the government would need to make a decision. The ministers could, in theory, decide to pursue the wealth order against Trump. Or they could find a new argument for rejecting it but that may open them up to further litigation.

A spokesman for Trump did not respond to a request for comment. His son, Eric Trump – a director of the Scottish golf courses – said in February that Scottish politicians who supported the unexplained wealth order were “advancing their personal agendas” and that the Trump Organization had “made an overwhelming contribution to the leisure and tourism industry.”

Avaaz lawyers and opposition politicians – including members of the Greens, Labor and Liberal Democrat parties – have criticized the majority’s interpretation of the law governing unexplained wealth orders.

“It raises eyebrows as to why Ministers are not availing themselves of this ability to put questions to the Trump Organization,” said Nick Flynn, legal director at Avaaz, a nonprofit that has pressed for the Scottish probe since 2019 as part of its global push for investigations into Trump. “If Trump can’t explain the source of the money, then the Scottish government has the responsibility to take action.”

In 2006, Trump bought 1,000 acres in Aberdeenshire for more than $10 million. Since then, he’s spent another $60 million building a golf course, a small hotel and a handful of holiday cottages, according to company filings with the UK corporate registry. The Trump Organization has said in public statements and filings that it has spent a total of more than $140 million on the development.

Trump, an avid golfer whose mother was Scottish, made a bigger investment in Turnberry, a seaside course that has four times hosted The Open – Europe’s only golf major. In 2014, he bought Turnberry’s course and resort for $60 million. Company filings in the UK show that Trump’s company spent another $100 million on course upgrades and other expenses.

Trump bought five other golf properties outside of Scotland in all-cash deals in addition to the Turnberry and Aberdeenshire courses. Trump told Reuters in 2016 that the operating losses at his golf courses were unimportant because his “big play” was creating real estate on the assets.

According to a Reuters analysis of satellite imagery and U.S. and European property filings, Trump appears to have made no progress in carrying out the strategy. According to land records and the president’s financial disclosures, the Trump Organization hasn’t constructed a single home at any of the 11 golf properties it owns outright in the last decade, according to the study.

Patrick Harvie, leader of the Greens, has expressed concerns in Scottish Parliament over how the courses were funded. “Big questions remain over Trump’s business dealings in Scotland,” he said in February 2020. The purchase of the two courses, he said, “were part of Trump’s huge cash spending spree in the midst of a global financial crisis, while his son was bragging about money pouring in from Russia.”

Harvie was referring to a comment attributed to Eric Trump by veteran golf writer James Dodson, who relayed a conversation with Trump’s son in a 2017 interview with National Public Radio. Dodson said Eric Trump told him the courses were financed with money from Russia.

Eric Trump has denied making the comment about Russian money to Dodson and called Harvie’s comments in Scottish Parliament false. Donald Trump has denied that he used any money from Russian sources to buy the Scottish golf courses.

Dodson, a Golf Magazine writer and Arnold Palmer’s biographer, was interviewed by Reuters. He said Eric Trump made the comment about Russian money when the two were conversing in August 2013 at Donald Trump’s golf club in Charlotte, North Carolina. When Trump bought a range of clubs, the golf industry was in financial trouble, according to Dodson, and banks were hesitant to lend money for golf course investments.

Dodson explained, “It was just a simple question.” “I asked, ‘How are you going to finance all of these acquisitions?’ ‘We don’t depend on American banks,’ he said. International investors provide us with all of the funds we need.’ And I recall wondering if he was referring to the Chinese. ‘No, we get all the money we need right out of Russia,’ he replied.

Dodson’s memory was mistaken, according to a Trump Organization spokeswoman.