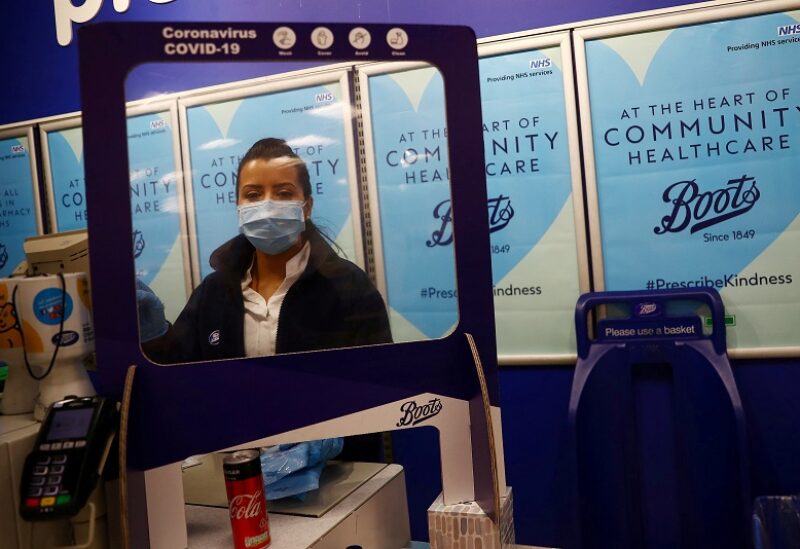 FILE PHOTO: A Boots employee wearing a face mask works at a counter behind a protective screen at a store in London, as the spread of the coronavirus disease (COVID-19) continues, London, Britain, April 8, 2020. REUTERS/Hannah McKay/File Photo

The Office for National Statistics issued a report indicating that almost 2.71 million people in the United Kingdom had Covid in the last week of June, which is an 18 per cent increase from the week prior. According to the report, one in every 25 people in the country was infected with Covid. Hospitalisation in the country is also increasing, which showed that there were 11,316 people with the virus, up from 8,350 on June 23, reported by The Guardian.

As of July 5, there were 3,749 patients in the UK who were hospitalised primarily as a result of the Covid, up from 2,877 from the day prior.
Hospital admission for Covid has increased, as per Dr. David Strain, a senior clinical lecturer at the University of Exeter medical school, who said that patients with infection may exhibit respiratory issues or delirium. He further added that the spike in the number of infection cases had also had a drastic effect on labour issues with Brexit, pensions and weariness. According to Strain, issues poised by the rise in infections have been exacerbated by the changes in policy around patient testing and wearing masks in hospitals.

He said, “This wave, which is driven by the highly transmissible BA.4 and BA.5 Omicron sub-variants, started to hit us at exactly the same time that there was significant government pressure to stop wearing masks in hospitals because of the way it appeared. And therefore, for a very brief period, there was a fair amount of in hospital transmission as well.”

Patients who have Covid or have been exposed to it cannot be discharged to care facilities, a concern raised by Strain.

Dr. Naru Narayanan, president of HCSA, the doctors’ union, said that they are concerned about the rising cases in the country. He also noted reports of staff absences from growing virus cases across the country.

“NHS staff are already under intense pressure amid a workforce crisis and morale is at rock bottom,” he said. He further continued, “Exhausted staff are stepping up to ensure that patient care does not suffer, but every week is a battle to fill rotas. The wisdom of watering down infection control procedures and removing face masks now looks decidedly lacking. “