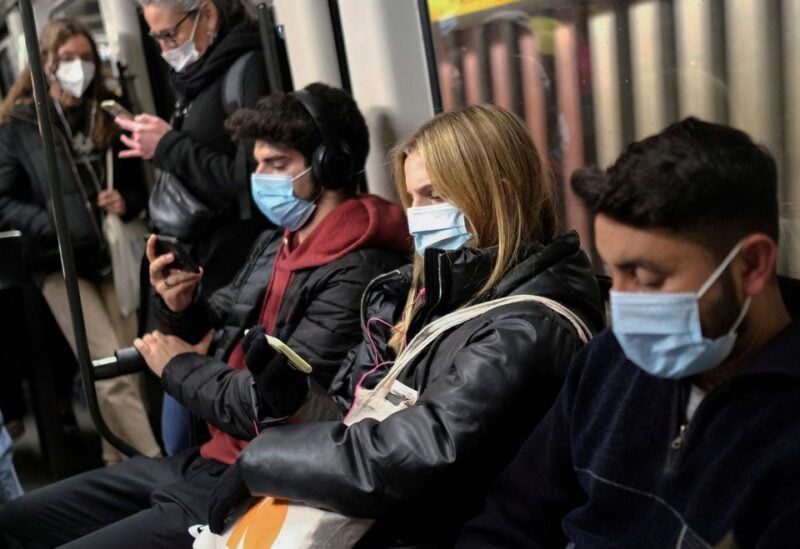 Commuters travel on an underground subway train, amid the outbreak of the coronavirus disease (COVID-19) and after Omicron has become the dominant coronavirus variant in Europe, in Barcelona, Spain January 12, 2022. REUTERS/Nacho Doce/File Photo

As cooler season arrives in Europe, a new COVID-19 wave appears to be developing, with public health experts warning that vaccine fatigue and misunderstanding over the varieties of available vaccines will likely limit booster uptake.

The BA.4/5 Omicron subvariants that dominated this summer are still trailing the bulk of infections, but newer Omicron subvariants are gaining ground. Scientists are tracking hundreds of new kinds of Omicron, according to World Health Organization (WHO) officials this week.

WHO data released late on Wednesday showed that cases in the European Union (EU) reached 1.5 million last week, up 8% from the prior week, despite a dramatic fall in testing. Globally, case numbers continue to decline.

Hospitalisation numbers across many countries in the 27-nation bloc, as well as Britain, have gone up in recent weeks.

In the week ended Oct 4, COVID-19 hospital admissions with symptoms jumped nearly 32% in Italy, while intensive care admissions rose about 21%, compared to the week before, according to data compiled by independent scientific foundation Gimbe.

Over the same week, COVID hospitalisations in Britain saw a 45% increase versus the week earlier.

Omicron-adapted vaccines have launched in Europe as of September, with two types of shots addressing the BA.1 as well as the BA.4/5 subvariants made available alongside existing first-generation vaccines. In Britain, only the BA.1-tailored shots have been given the green light.

European and British officials have endorsed the latest boosters only for a select groups of people, including the elderly and those with compromised immune systems. Complicating matters further is the “choice” of vaccine as a booster, which will likely add to confusion, public health experts said.

But willingness to get yet another shot, which could be a fourth or fifth for some, is wearing thin.

“For those who may be less concerned about their risk, the messaging that it is all over coupled with the lack of any major publicity campaign is likely to reduce uptake,” said Martin McKee, professor of European public health at the London School of Hygiene and Tropical Medicine.

“So on balance I fear that uptake will be quite a bit lower.”

“Another confounder is that quite a high proportion of the population might have also had a COVID episode in recent months,” said Penny Ward, visiting professor in pharmaceutical medicine at King’s College London.

Some may erroneously feel that having had a complete primary course and then having fallen ill with COVID means they will remain immune, she added.

Since Sept. 5, when the roll-out of new vaccines began in the European Union, about 40 million vaccine doses produced by Pfizer-BioNTech and Moderna have been delivered to member states, according to data from the European Centre for Disease Prevention and Control (ECDC).

However, weekly vaccine doses administered in the EU were only between 1 million and 1.4 million during September, compared with 6-10 million per week during the year-earlier period, ECDC data showed.

Perhaps the biggest challenge to uptake is the perception that the pandemic is over, creating a false sense of security.

“There must be some complacency in that life seems to have gone back to normal – at least with regards COVID and people now have other financial and war-related worries,” said Adam Finn, chair of ETAGE, an expert group advising the WHO on vaccine preventable diseases in Europe.

He added that some law-makers, too, were dropping the ball.

Italy’s Gimbe science foundation said the government, soon to be replaced after an election, was ill prepared for the autumn-winter season, and highlighted that a publication on the government’s management of the pandemic had been blocked.