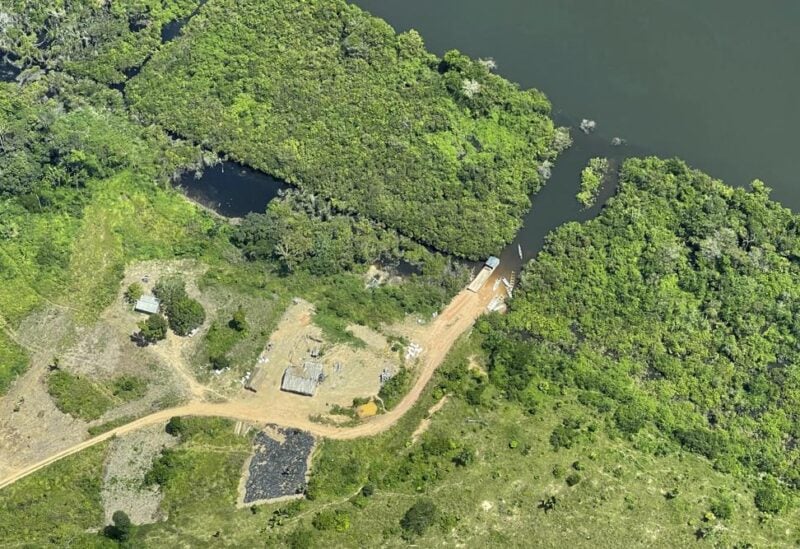 This May 2, 2022, photo provided by Xingu + Network shows an illegal road inside a protected area called Terra do Meio (Middle Earth) Ecological Station in Para state, in the Brazilian Amazon. The dirt road is now just a few miles shy of connecting two of the worst areas of deforestation in the region. (Xingu + Network via AP)

An illegal dirt road ripping through protected areas in the Brazilian Amazon is now just a few miles from connecting two of the region’s worst areas of deforestation. If the road is built, it will turn a significant portion of remaining woodland into an island, under pressure from all sides, according to satellite images and accounts from persons acquainted with the area.

Environmentalists have been warning about just this kind of development in the rainforest for decades. Roads are significant because most deforestation occurs alongside them, where access is easier and land value higher.

On the east side of the new road is a massively-deforested area where Brazil’s largest cattle herd, 2.4 million head, now grazes. This municipality of Sao Felix do Xingu is the country’s second-largest greenhouse gas emitter, thanks to deforestation, according to Climate Observatory, a network of environmental groups. It is roughly the size of Maine and has a population of 136,000.

To the west is an area where three years ago ranchers coordinated the burning of several swaths of virgin forest in an episode famously known as the Day of Fire. This municipality, larger than Maryland, is Brazil’s eighth-largest greenhouse gas emitter.

Wedged in between is the Xingu basin. The Xingu River that runs through it is one of the main tributaries of the Amazon River. It begins in the drier Cerrado biome, surrounded by tens of thousands of square miles of protected areas.

The Xingu River is home to several Indigenous peoples, who are now pressed on both sides by an onslaught of settlers who have built a large network of dirt roads and illegal airstrips. Experts said the stakes could not be higher.

The opportunities for new deforestation “in the center of the corridor of protected areas of the Xingu brings the risk of an irreversible breaking of the Amazon rainforest, dividing it into islands of degraded forest, which does not have the strength to resist climate change. We need to protect and maintain large forest corridors to sustain the resilience of the threatened biome,” Biviany Rojas, the program coordinator of Socio-Environmental Institute, a Brazilian non-profit, told the Associated Press.

Almost half of Brazil’s climate pollution comes from deforestation, according to Climate Observatory. The destruction is so vast now that the eastern Amazon, just east of Xingu basin, has ceased to be a carbon sink, or absorber, for the Earth and has converted into a carbon source, according to a study published in 2021 in the journal Nature.

“They come to deforest, to extract timber and to dig for gold,” Indigenous leader Mydjere Kayapo told the AP in a phone interview. His people, the Kayapo, have suffered invasions from loggers and gold miners, who contaminate rivers with mud and mercury, co-opt leaders and provoke internal division.

The new road was detected earlier this year. According to satellite images analyzed by a network of nonprofits called Xingu+ and reviewed by the AP, it is 27 miles (43 kilometers) long.

The road cuts through two ostensibly protected areas: Terra do Meio (Middle Earth) Ecological Station, a federal unit, and Iriri State Forest, managed by the state of Pará, famous for its deforestation rates.

The city of Novo Progresso is also west of the new road. In recent days, the city has been covered by thick smoke from wildfires, deliberately set. On Monday alone, satellite sensors picked up 331 outbreaks of fire in the municipality, according to monitoring from Brazil’s National Institute for Space Research. August, which falls in the dry season, is typically the second worst month for both deforestation and fire.

Brazil’s federal agency ICMBio, which manages protected areas, and Pará’s secretary of environment, didn’t respond to AP emails seeking comment about the illegal road. These are the agencies responsible for protecting the areas flanking the road.

Under far-right President Jair Bolsonaro, the area deforested in Brazil’s Amazon has reached a 15-year high, according to official data. Prodes at the space agency said the national monitoring systems showed the Brazilian Amazon lost more than 5,000 square miles (13,200 square kilometers) of rainforest in the 12 months from Aug. 2020 to July 2021. New data is expected out by the end of the year.