Cuba struggles to get oxygen to the sick, vaccines to the healthy 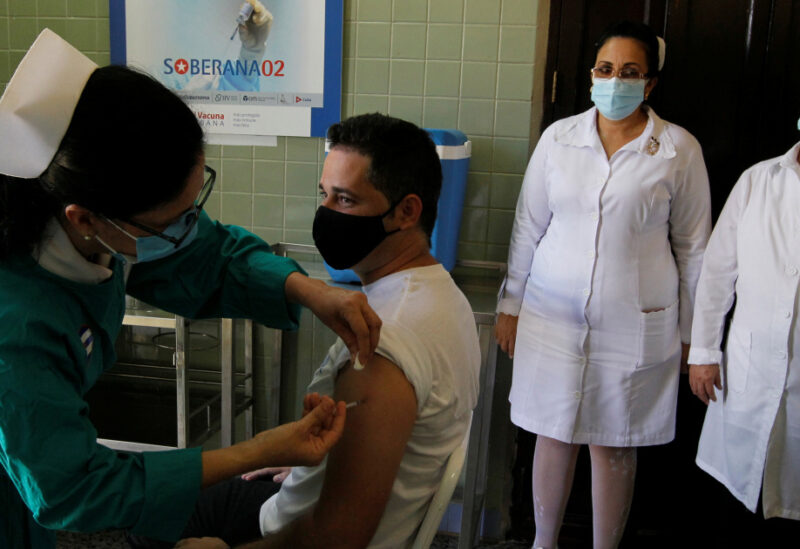 A volunteer receives a dose of the Soberana-02 COVID-19 vaccine, as part of Phase III trials of the experimental Cuban vaccine candidate, amid concerns about the spread of the coronavirus disease (COVID-19), in Havana, Cuba, March 31, 2021. Jorge Luis Banos/Pool via REUTERS

In the midst of a coronavirus outbreak, Cuba has turned to the military for oxygen, even as medics rush to provide locally made vaccinations to the populace.

On Sunday, the administration stated that the Caribbean island’s major oxygen plant had failed in the midst of a Delta variant-driven coronavirus outbreak that had resulted in a record number of cases and deaths, swamping some provincial health systems.

Cuban President Miguel Diaz-Canel visited a military unit that produces and transports scarce oxygen to COVID-19 patients on Tuesday, according to state-run media.

Diaz-Canel was seen on television inspecting three mobile military plants, including a recently donated Russian one, that produce oxygen and talking to military helicopter pilots ferrying the product to hospitals in various western and central provinces, presumably in the nick of time to save patients gasping for air.

“Your work is decisive,” he said.

Last week similar scenes from eastern Cuba were broadcast, featuring smaller oxygen-producing equipment on military trucks and the filled oxygen tanks transported by various types of vehicles to hospitals, but without the president.

Since the beginning of the pandemic, Cuba had reported a total of 536,609 illnesses and 4,023 deaths as of Monday.

The Cuban leader, who is also the Communist Party’s leader, was accompanied on Monday by the chief of the armed forces, Alvaro Lopez Miera, who was recently sanctioned by the US for his part in putting down protests in the country more than a month ago.

The health crisis, on top of economic woes, has resulted in a scarcity of consumer goods and frayed nerves in the Communist-run country. On July 11 tens of thousands took to the streets in protest, the most serious unrest since the early days of the 1959 Revolution.

Cuba’s gross domestic product contracted by a rate of 10.9% last year, and by an additional 2% through June compared with the same period last year.

Some residents and medical personnel have gone to social media to express their dissatisfaction with treatment in a country that takes pride in the excellence of its free health-care system.

As the government struggles to deal with the influx, it is also launching a program to immunize the full 11.2 million people with two locally made vaccines, Abdala and Soberana 2, which it claims have efficacy rates of more than 90%.

More than 3.2 million residents have been fully vaccinated, with another 2 million set to receive a last shot before September and more than 95 percent of the entire country by the end of the year.