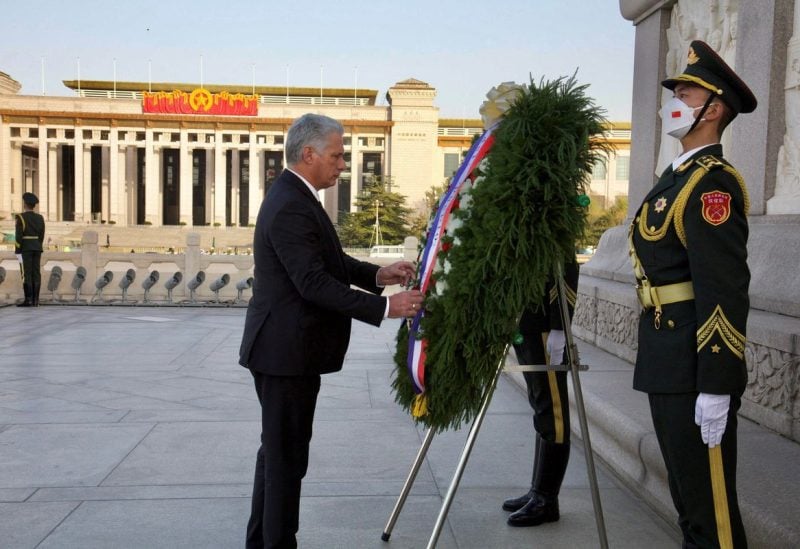 Cuba's President Miguel Diaz-Canel attends a wreath-laying ceremony at the Monument to the People's Heroes at Tiananmen Square in Beijing, China, November 25, 2022. Alejandro Azcuy/Courtesy of Cuban Presidency/Handout via Reuters

China has agreed to restructure Cuba’s debt and offer new trade and investment credits to the struggling Caribbean Island nation, following a meeting between the leaders of the two Communist countries in Peking.

Cuba’s Economy Minister Alejandro Gil stated that the latter had also contributed $100 million to assist the nation in coping with a lack of basic goods and an energy crisis made worse by Hurricane Ian, which devastated the western Pinar del Rio province in late September.

Gil was speaking in an interview with official media traveling with President Miguel Diaz-Canel as he returned home over the weekend from a tour of Algeria, Russia, Turkey and China.

Chinese trade and investment has slowed in recent years due to Cuba’s failure to meet restructured debt payments according to analysts and diplomats, a situation worsened by tighter U.S. sanctions, the pandemic and domestic economic inefficiencies.

“We are going to find mutually acceptable formulas for the ordering and restructuring of debts,” Gil said.

Analysts estimate the debt in the billions of dollars, although no official figures are available.

China is Cuba’s most important commercial partner after Venezuela, though trade has declined from over $2 billion in 2017 to $1.3 billion last year, according to the Cuban government.

Various investment projects have also ground to a halt.

Gil said China had agreed to quickly complete a floating dock, wind power and solar energy project, among others.

President Diaz-Canel told the official media after talks in Peking that debt was at the top of his agenda with President Xi Jinping who sympathized with the difficulties Cuba was going through.

The Cuban president said his Chinese counterpart indicated “a solution must be found to all the problems with Cuba, regardless of the debt, and that this cannot be what limits development.”