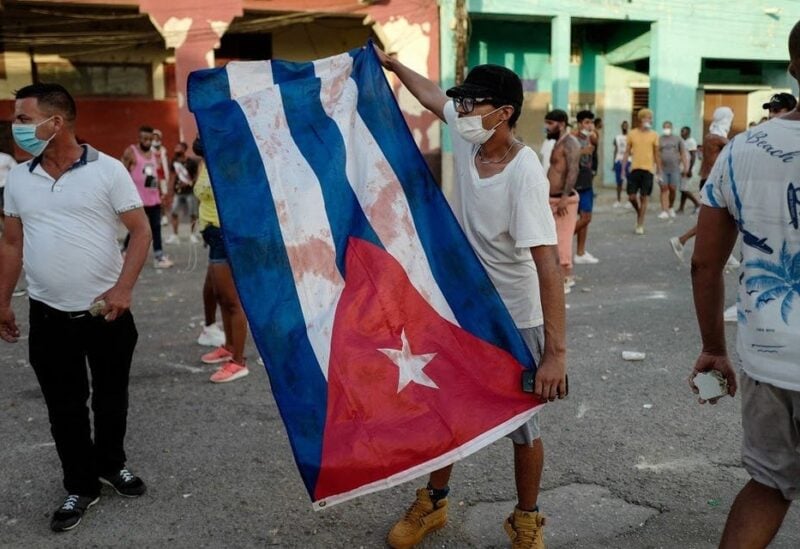 A man waves a Cuban flag during a demonstration against the government of Cuban President Miguel Diaz-Canel in Havana, on July 11, 2021. (Adalberto Roque/AFP)

Cuban President Miguel Diaz-Canel on Monday blamed US sanctions, tightened in recent years, for the medicine shortages, power outages and other economic shortcomings that fueled unusual protests this weekend.

Appearing alongside his Cabinet in a televised address, he also blamed a social media campaign for weaponizing the shortages against what he called Communist-run Cuba’s revolution.

“They threw stones at foreign currency shops, they stole items … and at police forces, they turned over cars – a totally vulgar, indecent and delinquent behavior,” he said.

The protests erupted amid Cuba’s worst economic crisis since the fall of the Soviet Union, its old ally, and a record surge in coronavirus infections.

The government blames the crisis on US sanctions and the pandemic, while its detractors cite incompetence and a Soviet-style one-party system.

President Joe Biden on Monday said the United States stands with the people of Cuba in their call for freedom and relief from the coronavirus pandemic and decades of repression.

“The Cuban people are bravely asserting fundamental and universal rights. Those rights, including the right of peaceful protest and the right to freely determine their own future, must be respected,” Biden said.

“The United States calls on the Cuban regime to hear their people and serve their needs at this vital moment rather than enriching themselves.”