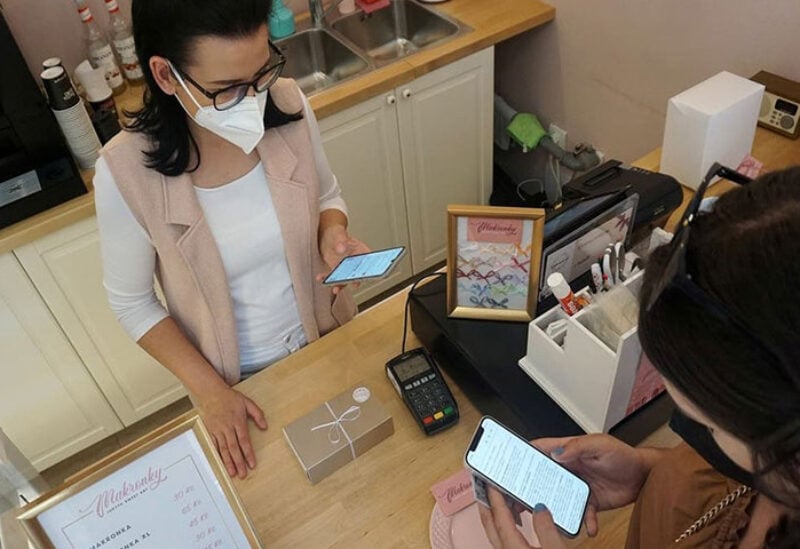 People paying with corrents in Czech

A Czech town has launched a scheme whereby residents are granted money to spend in shops and cafes that have been badly hit by COVID-19 lockdowns, in the form of digital vouchers being marketed as a special local currency.

Up to 2,000 residents of Kyjov are each being given $19 worth of “corrents”, a name mixing the words for “coronavirus” and “currency”, to spend at 40 businesses including shoe shops, a pharmacy and a burger joint.

When they make a purchase under the scheme, participants pay for half of it with corrents and the other half with their own money.

“It is good to support people to come and buy a nice burger and support us as well,” said Verka Vaskova, who works at a fast food outlet near Kyjov’s main square.

The Czech Republic, which has a population of 10.7 million, has been hard-hit by the pandemic. Restrictions kept most non-essential shops closed from late December until this week.

The Kyjov scheme is being funded to the tune of 800,000 crowns by a private individual who does not wish to be named, and administered by Pepe Rafaj, who came up with the idea.

Rafaj refers to the corrents as “drone money”, as a way of comparing it to the much-discussed concept of “helicopter money”, the idea that central banks could transfer cash directly to citizens as a form of monetary easing.

“I wanted to figure out how to take helicopter money and change it to drone money that will be targeted and effectively spent on boosting supply and demand,” he said.

The scheme is low-tech for consumers. They register online for a corrents account. When they make a purchase, all they need to do is either give their national ID card number to the business, or use a code delivered via a text message.

The business then sends a text message to the system, which automatically transfers the relevant quantity of corrents from the customer’s account to its own account. The business then get the corrents converted into crowns, usually the next day.

The country’s central bank classifies the Kyjov scheme as a local system of electronic discount vouchers, and therefore not a matter of concern for the monetary authority.

“At this time, for such an extraordinary purpose, it can be a suitable instrument,” Governor Jiri Rusnok told Reuters.

The mayor of Kyjov, Franisek Lukl, said he hoped the scheme could be expanded to other parts of the Czech Republic, perhaps using money from the European Union’s post-pandemic recovery funds. He said he planned to discuss this with the minister for labor next week.

“Part of this money … could be redistributed through corrents, because it is for the support of the local economy, the recovery after COVID-19,” said Lukl, who is also the chairman of the country’s Union of Town and Municipalities.

Pensioner Jarmila Perglova joined the scheme but had yet to spend her corrents. “Giving me 400, it’s good for the shopkeepers and for us as well,” she said. “I may buy shoes here across the street.”