Damien Hirst burns artworks after collectors pick their NFTs instead 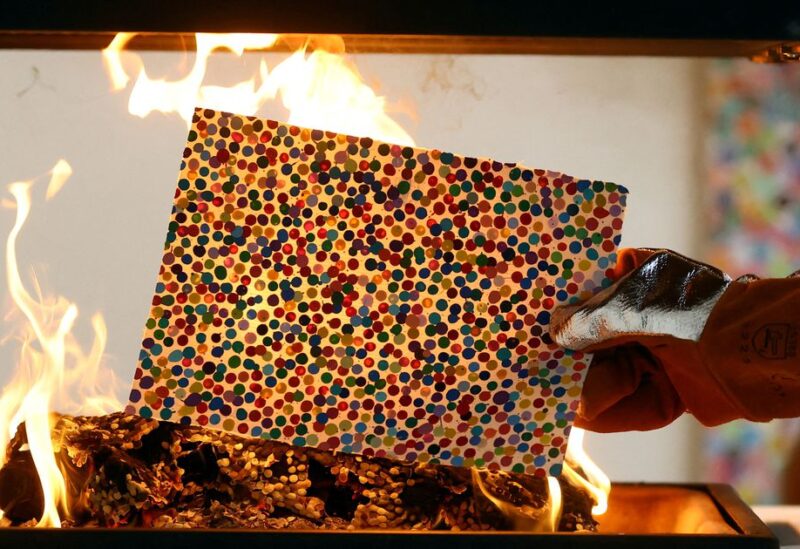 British artist Damien Hirst takes part in a burn event which is part of his latest NFT exhibition "The Currency", in London, Britain, October 11, 2022. REUTERS/Hannah McKay

Hundreds of works by British artist Damien Hirst were set on fire on Tuesday after buyers opted to keep their non-fungible tokens (NFTs), blockchain-based assets that represented their digital representations.

Hirst, who rose to popularity in the Young British Artist movement of the 1990s, debuted his first NFT collection, “The Currency,” in July 2021. The collection contains 10,000 NFTs that equate to 10,000 original works of art that feature vibrant spots.

Collectors had to choose between keeping the NFT, which reportedly sold for $2,000, or swapping it for the physical artwork. Some 5,149 picked the latter while 4,851 opted for the NFTs, according to London’s Newport Street Gallery.

It said artworks for non-exchanged NFTs would be destroyed and vice versa. Hirst told his Instagram followers on Monday he would burn 1,000 artworks on Tuesday.

Livestreaming the event, the Turner Prize winner and assistants used tongs to deposit individual pieces stacked in piles into fireplaces in the gallery as onlookers watched.

“A lot of people think I’m burning millions of dollars of art but I’m not, I’m completing the transformation of these physical artworks into nfts by burning the physical versions,” Hirst wrote on Instagram on Monday.

“The value of art digital or physical which is hard to define at the best of times will not be lost it will be transferred to the nft as soon as they are burnt.”

The artworks, created in 2016 with enamel paint on handmade paper and each numbered, titled, stamped and signed, will be burned until “The Currency” exhibition closes on Oct. 30.

NFTs soared in popularity last year as crypto-rich speculators sought to cash in on rising prices but sales volumes have fallen more recently.

Hirst, 57, is known for his divisive works, which include “The Physical Impossibility of Death in the Mind of Someone Living”, consisting of a dead shark floating in formaldehyde and “Mother and Child, Divided”, a bisected cow and calf.

He is also famous for his spot paintings and “For The Love Of God”, a platinum cast of an 18th-century human skull encrusted with diamonds.

Asked how he felt to be burning the works, Hirst said: “It feels good, better than I expected.”