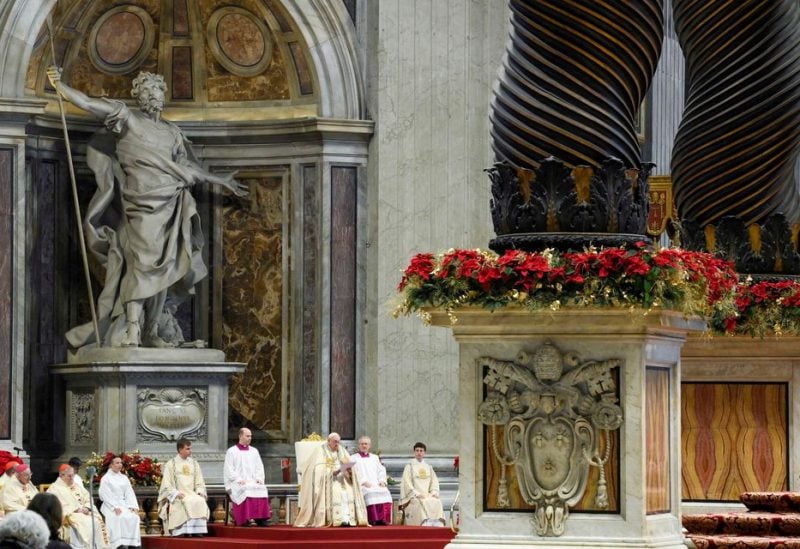 Pope Francis leads the Mass to mark the World Day of Peace in St. Peter's Basilica at the Vatican, January 1, 2023. Vatican Media/­Handout via REUTERS

On Sunday, Pope Francis observed the Roman Catholic Church’s customary World Day of Peace, but the beginning of the new year at the Vatican was overshadowed by Benedict’s passing.

Francis presided over a Mass in St. Peter’s Basilica while Benedict’s remains was being readied for three days of open viewing in the same church beginning on Monday. Benedict passed away on Saturday at the age of 95.

The first photos of the late Benedict were made public by the Vatican on Sunday. They showed him lying in state in the chapel of the monastery where he died while wearing crimson and gold liturgical attire.

His body will be moved privately to the basilica, unlike what followed the death in 2005 of Pope John Paul, whose body was moved in a solemn outdoor procession that was televised live around the world.

In accordance with Benedict’s wishes, his funeral on Thursday will be simple and solemn. It will be the first time in many centuries that a sitting pope will preside at the funeral of his predecessor. Benedict, who stepped down in 2013, had been the first pontiff in 600 years to resign.

Jan. 1 is also the feast of the Mother of God and in his homily, Francis asked the Madonna to accompany “our beloved” Pope Emeritus Benedict “on his passage from this world to God”.

Benedict was also remembered in one of the prayers at the Mass.

In his homily, Francis urged his listeners to work actively for peace, and not “waste time glued to a keyboard in front of a computer screen” but to “dirty our hands and to do some good”.

Later at his Sunday blessing in St. Peter’s Square, Francis made another appeal for an end to the conflict in Ukraine, saying it was “intolerable contrast” with the theme of the day.