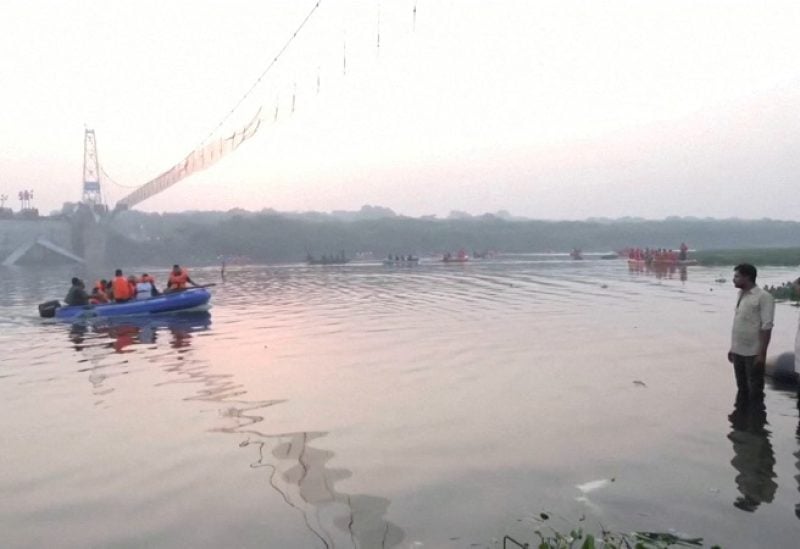 People look on as rescuers in boats work at the site of a suspension bridge collapse in Morbi town in the western state of Gujarat, India, October 31, 2022. ANI via REUTERS THIS IMAGE HAS BEEN SUPPLIED BY A THIRD PARTY INDIA OUT. NO COMMERCIAL OR EDITORIAL SALES IN INDIA

India’s western Gujarat state suspension bridge collapse has led to 141 deaths, according to an official.
Devendrasinh Jadeja, a senior fire department official in Morbi district, told Anadolu Agency the rescue operation continued overnight and the death toll has reached 141 as of Monday morning.
“The rescue operation is still going on,” he said.
Officials said the incident occurred on Sunday evening in the Morbi district when a British-era bridge collapsed just a week after renovation.
Gujarat Home Minister Harsh Sanghavi said early Monday that so far 132 people have died in the incident. At a press briefing, he said that a high-level team of officials is investigating the incident.
Local broadcaster NDTV said Sunday evening that there were around 500 people on the bridge when it collapsed.
The local administration in a statement said that “relief operations have been accelerated by the state government” and that the Indian military is also taking part in the rescue operation.
Prime Minister Narendra Modi said Sunday that he has also spoken to the chief minister of Gujarat about the incident.
“He has sought urgent mobilization of teams for rescue ops. He has asked that the situation be closely and continuously monitored, and extend all possible help to those affected,” Modi’s office said on Twitter.