Death toll of powerful 7.2-magnitude earthquake in Haiti soars to 1,297 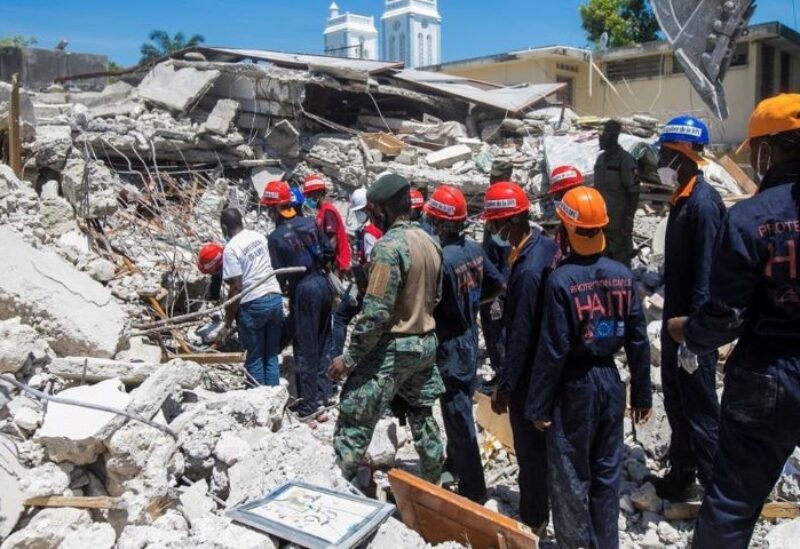 Members of a rescue and protection team clean debris from a house after a 7.2 magnitude earthquake in Les Cayes, Haiti

The death toll from a magnitude 7.2 earthquake in Haiti reached at least 1,297 Sunday as rescuers raced to find survivors amid the rubble ahead of a potential deluge from an approaching tropical storm.

Saturday’s earthquake also left at least 2,800 people injured in the Caribbean nation, with thousands more displaced from their devastated or damaged homes. Survivors in some areas were forced to shelter in streets or soccer fields with their few salvaged belongings while overloaded hospitals scrambled to help those who were injured.

Yet the devastation could soon worsen with the coming of Tropical Depression Grace, which is predicted to reach Haiti on Monday night. The US National Hurricane Center demoted the tropical storm to a depression Sunday, but forecasters warned that regardless, Grace still posed a threat to bring heavy rain, flooding and landslides.

The earthquake struck the southwestern part of the hemisphere’s poorest nation, almost razing some towns and triggering landslides that hampered rescue efforts in a country already grappling with the coronavirus pandemic, a presidential assassination and a wave of gang violence.

The epicenter was about 125 kilometers (78 miles) west of the capital of Port-au-Prince, the US Geological Survey said, and aftershocks continued to jolt the area Sunday.

In the badly damaged coastal town of Les Cayes, some families salvaged their few belongings and spent the night at an open-air football pitch. On Sunday morning, people lined up to buy what little was available: bananas, avocados and water at a local street market.

Some in the town praised God for surviving the earthquake, and many went to the city’s cathedral, which appeared outwardly undamaged even if the priests’ residence was destroyed.

“We only have Jesus now,” said Johanne Dorcely, 58, whose house was destroyed. “If it wasn’t for Jesus, I wouldn’t be able to be here today.”

Prime Minister Ariel Henry declared a one-month state of emergency for the whole country and said he was rushing aid to areas where towns were destroyed and hospitals overwhelmed. A former senator rented a private airplane to move injured people from Les Cayes to Port-au-Prince for medical assistance.

“The most important thing is to recover as many survivors as possible under the rubble,” said Henry. “We have learned that the local hospitals, in particular that of Les Cayes, are overwhelmed with wounded, fractured people.”

Hospitals were overwhelmed at a moment when Haiti has been struggling with the pandemic and a lack of resources to deal with it. The country of 11 million people received its first batch of US-donated coronavirus vaccines only last month via a United Nations program for low-income countries.

Medical workers from across the region were scrambling to help as hospitals in Les Cayes started running out of space to perform surgeries.